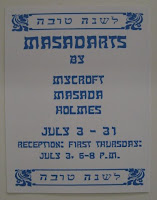 Although I've always been an artist and from a family of artists, I've been extremely bad about sharing that, especially showing and selling. This month, I’m finally having my first (duo) show!

I was at my local library, the Jamaica Plain Branch of the Boston Public Library, and saw a sign calling for artists to display their work there. I asked about it and learned that the Jamaica Plain Centre / South Main Streets organization has a First Thursdays program wherein artists install their work at the businesses etc. in JP Center, including the library. “Each First Thursday of the month businesses along Centre and South Streets are transformed into galleries featuring works from local artists. Open receptions, at each location, from 6:00 to 8:00 pm, offer a chance to meet the artists, enjoy refreshments, and experience JP’s fabulous businesses in an entirely new light. Artworks usually remain on display for the remainder of the month.”

The library scheduled me as one of their two July artists. The other is Gordon Toone, whose provider at an adult day program approached the library. “Jamaica Plain Branch Library, corner South & Sedgwick, GORDON TOOME, acrylics: MYCROFT MASADA HOLMES, sculptural constructions.” (I don’t know where they got that phrase, but it’s not a bad thing.)

The opening reception was tonight, Thursday July 3rd. Everyone who replied to my email to locals saying that they would attend did -- my colleague Marvin, university mate Jill, and their coworker Joanie; my father Bill, stepmother Mia, youngest brother and sister Jack and Eloise, and their dog Olivia; my friends IlanaRei and Sara; my colleague Chelsea and her housemate Erica; my former coworker Pat. Thank you so much!

There was a refreshments table (alcohol-free, yay), and another with Gordon’s flyers and my pricelist, guestbook and business cards. I sold one of my seven pieces, and took a commission based on another. I hope to sell more, and plan to have my art sold by at least one Jamaica Plain shop.

I met and liked Gordon and his daughter who was acting as his agent, as well as his art. And he too had a successful reception.

I knew that the library was one of the least popular gallery locations, and so was pleasantly surprised by how much like an art gallery show opening this was, and what a primary role I played in that. When the reception ended, I learned that the library has been doing this for several years and have never had a reception anywhere near as successful – indeed, most people only attend because the library is open during the opening and they want to access its services. The staff was shocked and thrilled by this opening. “You’re famous! I had no idea!” James kept exclaiming. Well…I am famous, but not as an artist. I’m famous (locally and somewhat nationally and internationally) as a GLBT, especially trans, leader. And I can transfer that fame to my artwork. And that’s when I realized: I’d just officially become one of those celebrities who become famous for something else and then reveal that they’re also a visual artist! Fascinating, as Spock would say. And funny. I’m glad I’m one of the too unusual cases where the primary work and artwork are both positive.

Click here for my Picasa Web Album (another Google product I highly recommend, both the offline and online software) of photographs of the reception.

The show continues during library hours through Thursday July 31st.

Thank you to Branch Librarian James Morgan and his staff!
Posted by Mycroft Masada at 3:33 PM