This is our first Pesach / Passover living together.  We considered sedering at Bet Mishpachah (the queer shul of DC) or maybe elsewhere, but decided to celebrate at home.  I was tempted to overthink and overdo it -- as I so tend to! -- but didn't, instead keeping it pretty simple and spontaneous, and it turned out nicely.  I didn't even buy or unpack much, but put it together at the last minute from our recent supermarket finds -- including the good old free Maxwell House haggadah -- and things we already had around the house.  It did help that I've attended and co-led some seders, including the Pride Seder (held in June) invented by my home shul Congregation Am Tikva (the queer one of Boston).

I had thought to try one of my new jars of gefilte fish tonight, but Julia's mum felt like Chinese food, and we decided to join her -- J and her mum have a tradition of Chinese delivery on Friday nights, and we half-joke that it makes my Jewish self feel more at home here.  We kept it otherwise informal too, and didn't seder per se, but talked about the process and the rest of Pesach -- partly at the request of J's mum, though she knows a fair amount.  The pastor at her former church was actually a former Jew who brought some of his traditions with him, including using matzah for communion and as a Sunday school snack with peanut butter.


Here is our Pesach table: 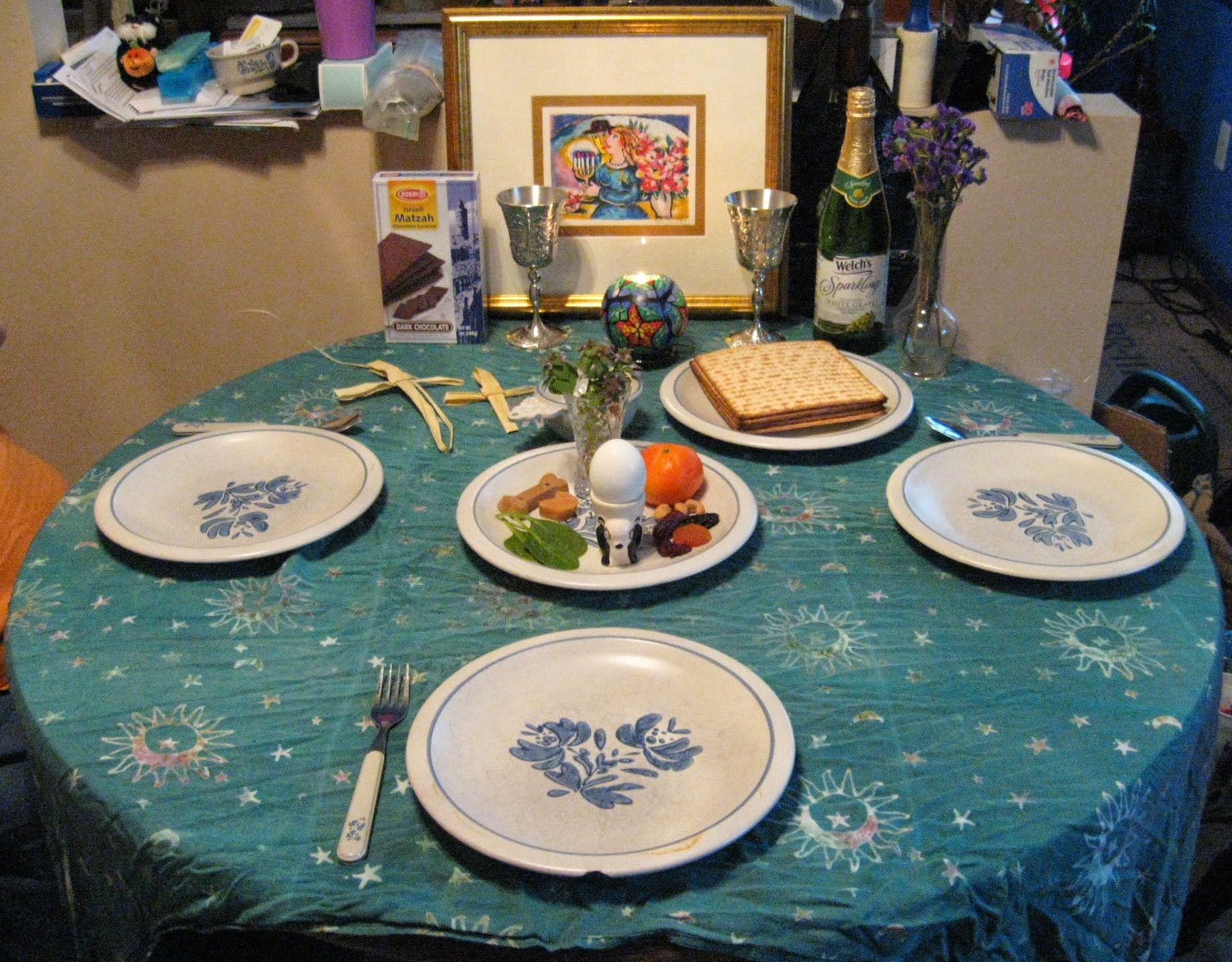 A fringed cloth batiked with suns/moons and stars that I found at Boomerangs last year but hadn’t used yet;

Julia’s mum’s Pfaltzgraff Yorktowne plates, silverware and measuring cup (behind the seder plate flowers, containing the traditional salt water);
our seder plate – close-up photo and detailed description in a bit;
Manischewitz egg and Osem dark-chocolate-covered matzah;
Mullingar Pewter goblets depicting Queen Maeve and Brian Boru for our sparkling white grape juice and Miriam’s Well;
a signed artist proof of the late Zamy Steynovitz’s “Shabbat Bouquet” that we received as a surprise gift just this past Erev Shabbat;
the dried purple flowers J's mum saved from the arrangement we took home from J's paternal Gran’s memorial event last month;
a stained-glass ball candle that belonged to my late Mum resting on J’s green glass ye olde Jamestown Virginia souvenir;
and the crosses we made from the palm leaves we were given at Palm Sunday yesterday (we’d never done it before, but found tutorials on YouTube).

Here is a close-up of our seder plate: 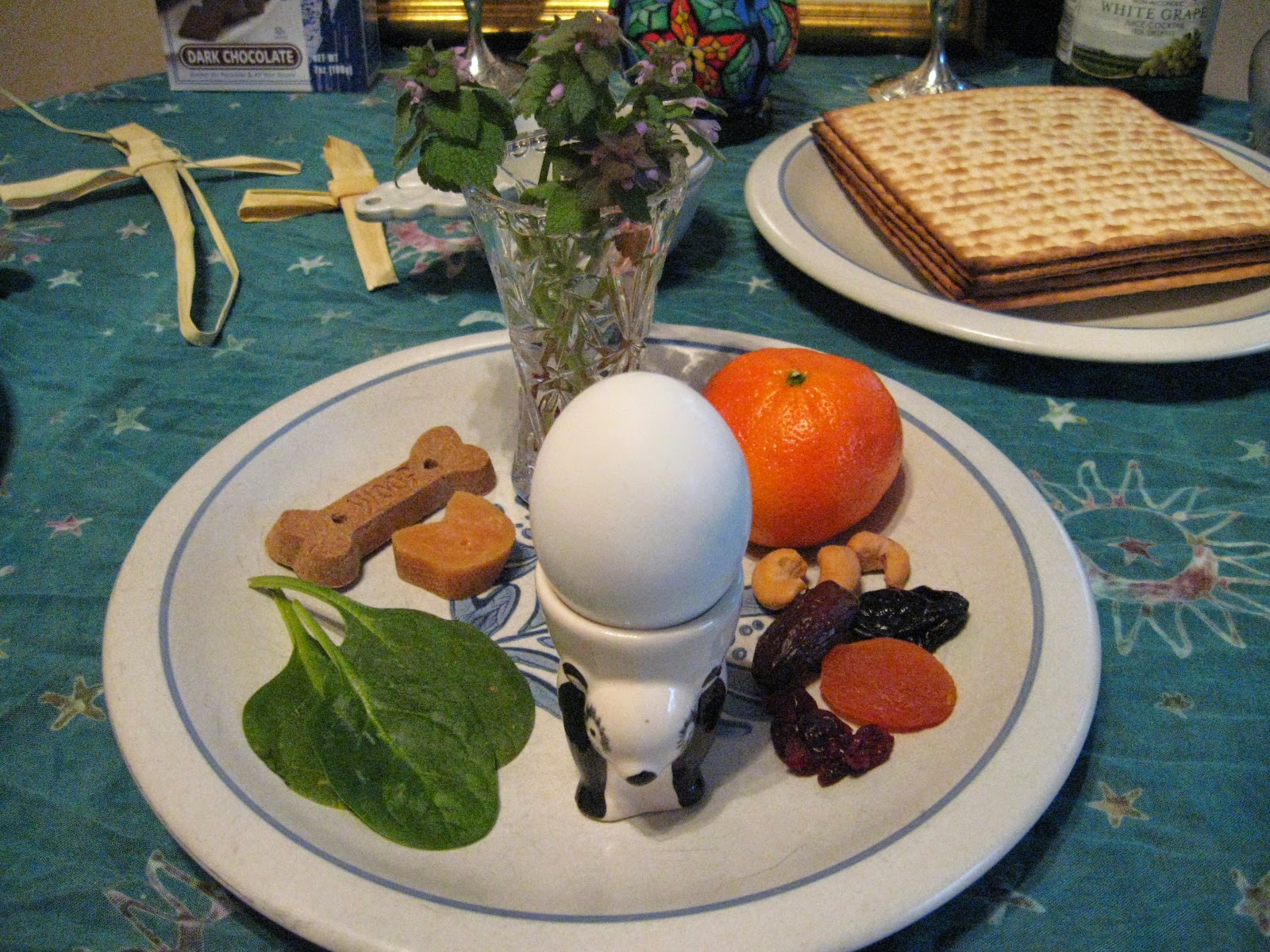 Again, the plate is one of Julia’s mum’s Pfaltzgraff Yorktowne ones.

Our maror / chazeret is spinach (though we actually eat it quite often);
Our charoset is cashews, dried apricot, date and cranberries, and a prune (my in-between-meals snacks, especially when I’m working away from home; Prune was one of my childhood nicknames because my name was June);
Our karpas is henbit deadnettle/ greater henbit from our yard in a Lenox crystal vase that was a prize at a dog show when J’s late father used to show dogs;
Our zeroa is two kinds of our dogter Ursula’s treats – a classic bone-shaped biscuit (which she got to eat afterwards, and we particularly like that it says “WOOF” because we’re Bear fans in the queer sense), and a Himalayan Dog Chew’s Yaky Nugget -- a sort of hard-candy made of yak and cow milk with lime juice and salt that you can microwave to make into a chewy puff;
Our beitzah is the usual hard-boiled egg (boiled with several others so we can make egg salad this week), and the egg cup is a panda one I found at Boomerangs for J's birthday;
And we have an orange, inspired by Susannah Heschel’s 1980s creation of a new tradition to further the inclusion of queer and other marginalized people (a Halo-brand orange, no less).

Our poor dogter Ursula didn’t appreciate being passed-over (ha!) for dessert – Osem dark-chocolate-covered matzah – not to mention everything else.  (She's a Pugston Terrier / Bugg -- a Boston Terrier / Pug mix, brindle with a white chest and paws.) 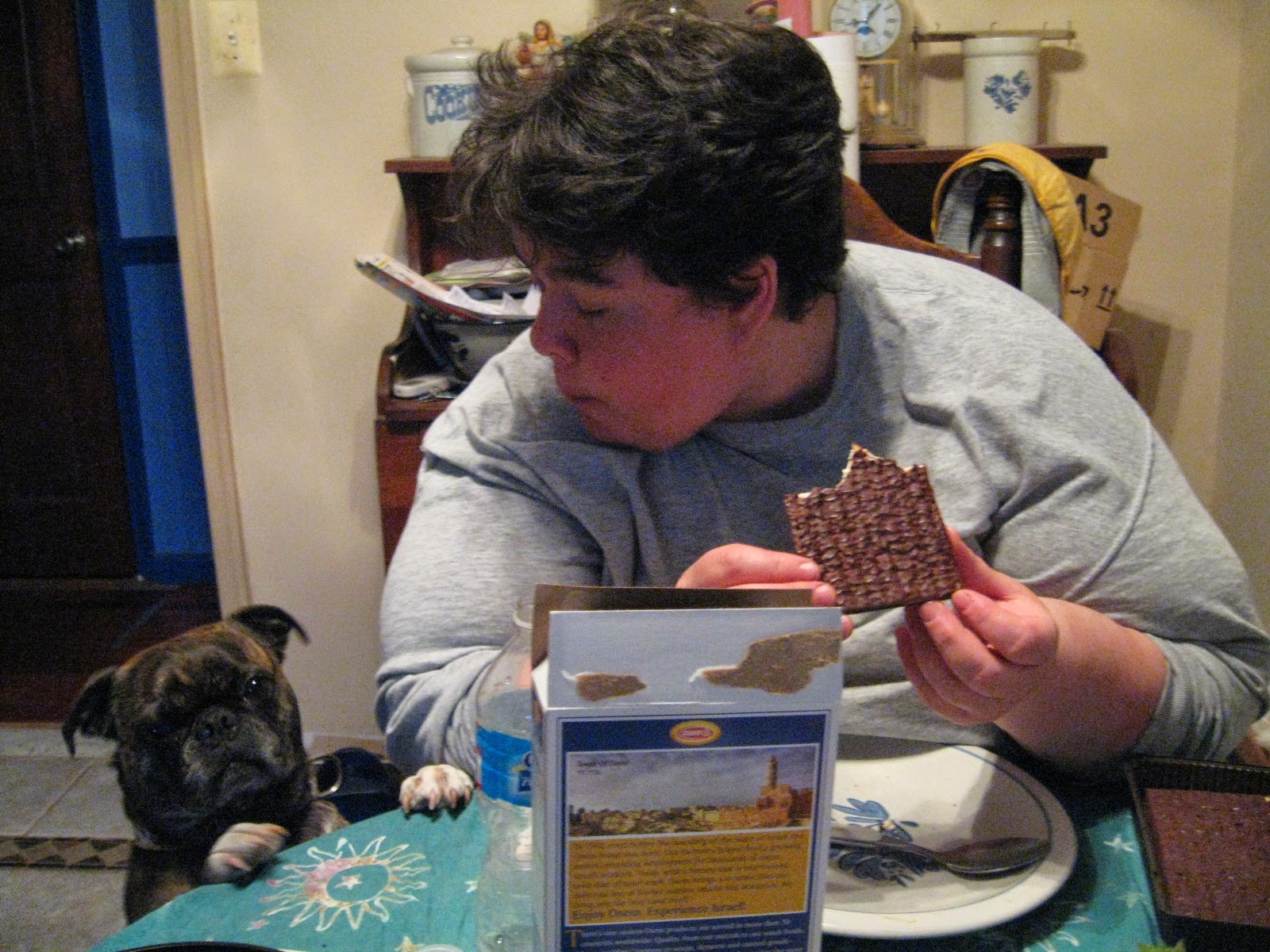 Posted by Mycroft Masada at 12:01 PM No comments: