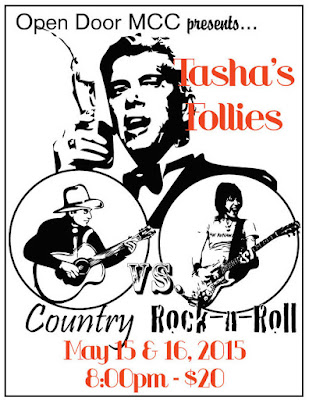 Julia and I had such a good time at our first and Open Door Metropolitan Community Church’s 19th Tasha’s Follies – Open Door’s almost-annual fundraising variety show with raffle to benefit WUMCO Help! Thanks, everyone!!

We went tonight; it is, unbelievably, tomorrow night too. This year’s theme was Country Vs. Rock & Roll. They brought new meaning to ‘being a fool for the Lord’, and I truly do mean that in a wonderful way. To some extent, of course, ‘you had to be there’ – and I’m particularly sorry that some of you couldn’t be. But here are some of my highlights:

Plus tasty treats during intermission, and a number of extras that are hard to describe. Here is the flyer.  And, we made Julia’s outfit into her latest Massculine Fatshion post; though I was so into that that I forgot to get photos of my own outfit, oy.
Posted by Mycroft Masada at 11:30 PM No comments: