Today was TransFaith’s 6th annual Pre-Event at Philadelphia Trans Health Conference.  As usual, we gathered the day before the con began, and at the William Way LGBT Community Center (also as usual, it's hard to not to enjoy their website is WayGay.org).

I’m a Community Engagement Adviser at TransFaith, and was especially happy – and anxious -- about this year’s Event because it included our first public conversation about fatphobia.  As a trans faith leader called to fat justice, I’ve been very unpleasantly surprised, to put it very mildly, by my attempts to have this conversation with trans, faith and social justice communities – and very pleasantly surprised with the conversation at TransFaith.  Talking and taking action towards fat justice is vital and long overdue, and it is so good to have a trans faith home, centered in social justice, that is on this road.  And we are talking about how to continue this public conversation this year, so stay tuned.

This year’s Pre-Event theme was “Growing Beyond”.  As our PR put it:  “We will gather and discuss how we might grow our intentionality in support of aspects of marginalization that are less frequently discussed within our community. Holiday Simmons will facilitate overall, with several small group leaders focusing conversation in specific topic areas. We will explore each of our relationships with issues related of age, nationality / immigration and fat-phobia/body image.”

We gathered informally for a short time, and then Holiday led us in an opening exercise, and we went around and did introductions – the opening question was to share a place we feel safe.  We also wrote about who we wish could be with, and shared some of that with the group.  Then we had attendees count themselves off into three groups, go to separate spaces, and rotate once an hour – so that each group experienced each topic.  Facilitators included Ovid Amorson, Janis Stacy, Gee Imaan Semmalar and his sisters; I co-facilitated the fatphobia conversation with TF’s Director of Community Engagement Louis Mitchell.

Our workshops and the rest of the day were definitely both a learning experience and a success – and that was especially surprising and relieving considering the logistical issues; everything from immigration issues with our immigration facilitators to snack snafus.  Longish story short, more of us were believers in Mercury retrograde by the end of the day.  But we improvised well, and most things were sorted out by dinner – which was from Maoz Vegetarian, sponsored by Lambda Legal.

We had about thirty people, with some coming and going all throughout the event.  Our biggest group by far was from Equality Pennsylvania – here is their photo at the event, taken by Equality PA’s Faith Organizer Ammon Ripple. 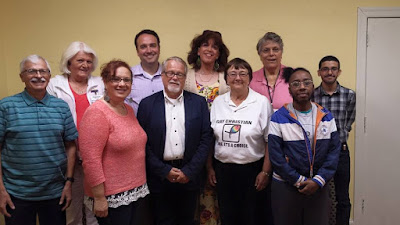 I also attended the rest of PTHC, which I hadn’t done since 2012 – more about that in my next post.