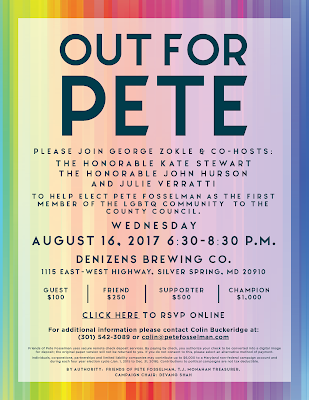 Tonight I went to Out For Pete -- an LGBTQ-focused event for Pete Fosselman’s campaign for Montgomery County Maryland’s Council (District 1) at Denizens Brewing Co. (where the #MoCoPrideCenter had our second Social last month, which is the first time I'd been there).

I know Pete because he’s been a fellow Visionary (founding leader) at the Center -- though of course we don’t endorse candidates -- and he would indeed be the first openly LGBTQ member of the Montgomery County MD Council; he is a cis (non-trans) gay man.

And a highlight of the event was a talk by candidate Danica Roem, who would be the first openly trans legislator in Virginia (and her election for Delegate is November 7th).