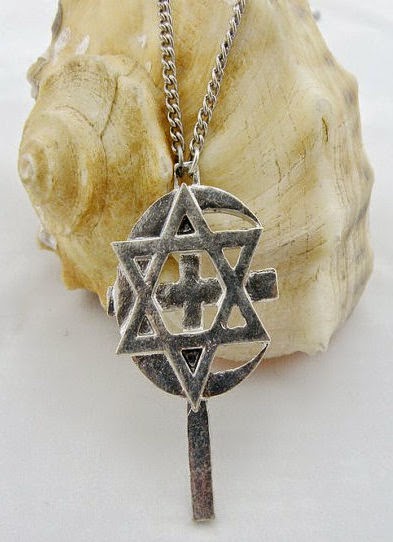 The images are from Etsy – I found them and a few others while shopping for interfaith jewelry making supplies; I don’t think I’ve ever seen a magen David / cross / crescent design before, in any context (metal one here, wooden one here).

At Episcopal Church of the Ascension, our priest, Rev. Randy Lord-Wilkinson, is also the convener of the Gaithersburg Interfaith Alliance; thus and otherwise are we connected with the Interfaith Meditation Initiative based in Washington DC – their mission is to bring together ordained and lay religious leaders from diverse faiths to share meditation with each other and with public audiences in churches, synagogues, mosques, temples, and universities.

IMI had a previous event that included Ascension last November 6th; hosted by Kehilat Shalom, led by their Rabbi Charles Arian along with Randy and Imam Bahsar Arafat of the Civilizations Exchange and Cooperation Foundation.

Julia wasn’t able to attend, and I wasn’t visiting, so we were glad to hear about tonight.  And this time we were at Ascension, in the chapel building.  We began at 7:30, and Rabbi Arian and Rev. Randy were joined by Waleed Ziad of the International Cultural Center and Andrew Stern, IMI’s Founding President.  It was quite a small group that attended, just a few from each community at most; but though it’s a shame that so many people missed it, there was something good about the intimacy and all.  We had a welcome from Randy, an introduction from Andrew, and then Rabbi Charles, Mr. Ziad, and Randy each spoke briefly about mediation in the context of their faith tradition and guided us in mediation exercises; in between, Andrew led us in stretching and Randy in chair yoga. 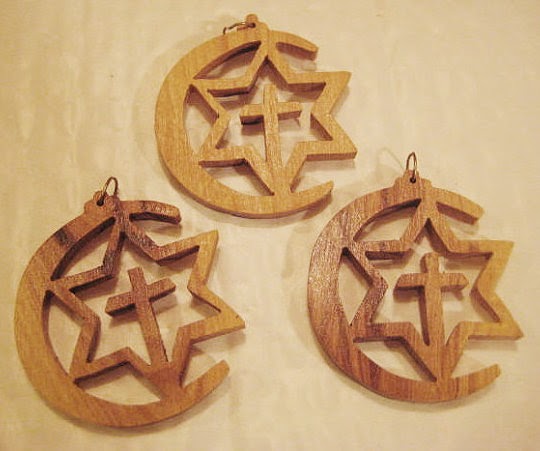 One highlight was the body size and shape diversity – the presenters ranged from smaller than me to larger than Julia, and alas the latter is a rare experience for us in most spaces.  Another was how well the Muslim piece worked for me – especially the chanting of “Al-lah” – which I know was partly because I’ve had too little experience with Islamic practice.  And on a related note, amen to Randy’s bio:  “His experience with classical Christian spirituality, especially Centering Prayer and the Spiritual Exercises of Ignatius of Loyola, is that prayer impels Christians into social justice.”  (Yes, socially unjust Xtians -- the power of Christ impels you!)

Charles and Waleed led us in a combination of personal meditations on individual words – I chose “mensch” – and communal chants of sacred Hebrew and Arabic phrases.  Randy gave us a handout on Lectio Divina, divine reading, a Benedictine practice of scriptural reading, meditation and prayer.

Click here to see the Praying With Scripture lectio divina handout (PDFed scan of my hard copy).  I don't have a soft copy of the scripture handout, but I could get or make one. 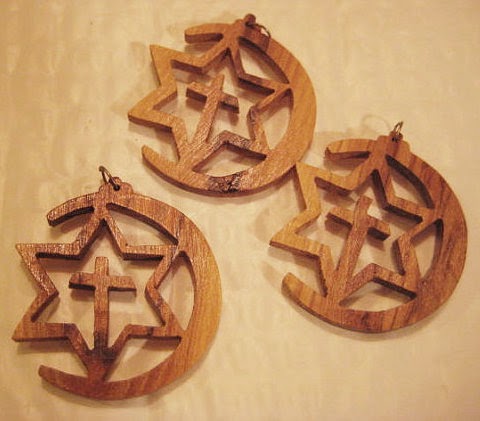 1 Kings spoke to me particularly about my discernment process around my new life here in Maryland (I’ve always lived in Massachusetts, in metro Boston, and moved here in January to begin living with Julia, who has always lived here).  “Why are you here, Elijah?”  Why are you here, Mycroft?  Why am I here?

1 Kings 19
Elijah was terrified.  He got up and ran for his life.  He arrived at Beer-sheba in Judah and left his assistant there.  He himself went farther on into the desert a day’s journey.  He finally sat down under a solitary broom bush.  He longed for his own death: “It’s more than enough, Lord!  Take my life because I’m no better than my ancestors.”  He lay down and slept under the solitary broom bush.

Then suddenly a messenger tapped him and said to him, “Get up! Eat something!”  Elijah opened his eyes and saw flatbread baked on glowing coals and a jar of water right by his head. He ate and drank, and then went back to sleep.  The Lord’s messenger returned a second time and tapped him. “Get up!” the messenger said. “Eat something, because you have a difficult road ahead of you.”  Elijah got up, ate and drank, and went refreshed by that food for forty days and nights until he arrived at Horeb, God’s mountain.  There he went into a cave and spent the night.

The Lord’s word came to him and said, “Why are you here, Elijah?”

Elijah replied, “I’ve been very passionate for the Lord God of heavenly forces because the Israelites have abandoned your covenant.  They have torn down your altars, and they have murdered your prophets with the sword.  I’m the only one left, and now they want to take my life too!”

A voice came to him and said, “Why are you here, Elijah?” 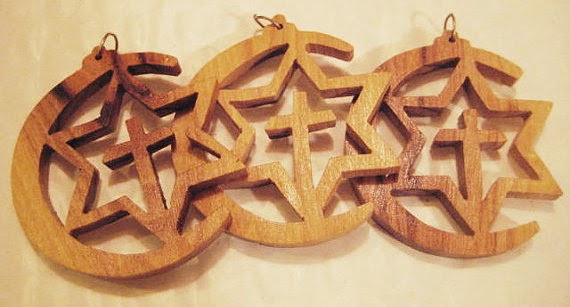 1 Corinthians spoke to me especially about the miracle of finally finding true love with Julia, and within that sharing this experience with her tonight.

The Qur'an readings reminded me that I need to read much more of and about the Qur'an, though of course they were meaningful in other ways as well.  In our scripture handout, each passage was preceded by a phrase summarizing the theme -- I think this was primarily intended to help new-to-Islam readers.

O mankind!  We created you from a male and a female and made you into nations and tribes that you may know and honor each other (not that you should despise one another).  Indeed the most honorable of you in the sight of God is the most righteous.
* * *
God does not forbid you to be kind and equitable to those who have neither fought against your faith nor driven you out of your homes.  In fact God loves the equitable.
* * *
And in their [the earlier prophets] footsteps We sent Jesus the son of Mary, confirming the law that  had come before him.  We sent him the Gospel, therein was guidance and light and confirmation of the law that had come before him, a guidance and an admonition to those who fear God.
* * *
Whoever recommends and helps a good cause becomes a partner therein, and whoever recommends and helps an evil cause shares in its burden.
***
Repel (evil) with what is better.  Then will he, between whom and thee was hatred, become as it were thy friend and intimate.  And no one will be granted such goodness except those who exercise patience and self-restraint.
***
Be quick in the race for forgiveness from your Lord, and for a Garden (paradise) whose width is that of the heavens and of the earth, prepared for the righteous -- Those who spend (freely), whether in prosperity or in adversity, who restrain (their) anger and pardon (all) men -- for God loves those who do good.
***
Whoever works righteousness, man or woman, and has faith, verily, to them will We give a new Life, a life that is good and pure, and We will bestow on such their reward according to the best of their actions.
***
And what will explain to you what the steep path is?  It is the freeing of a (slave) from bondage; or the giving of food in a day of famine to an orphan relative, or to a needy in distress.  Then will he be of those who believe, enjoy fortitude and encourage kindness and compassion.
***
God is the Light of the heavens and the earth.  The parable of His Light is as if there were a Niche, and within it a lamp; the Lamp enclosed in Glass; the glass a brilliant star, lit from a blessed Tree, an Olive neither of the East nor of the West whose Oil is well-nigh luminous through fire scarce touched it.  Light upon Light!  God doth guide whom He will to His Light.
***
Seest though not that it is God whose praises all beings in the heavens and on earth do celebrate, (even) the birds (of the air) with wings outspread?  Each one knows its own (mode of) prayer and praise.
***
And among His signs is this that He created for you mates from among yourselves, that ye may dwell in tranquility with them, and He has put love and mercy between your (hearts); verily in that are signs for those who reflect.
***
Show forgiveness, speak for justice and avoid the ignorant.
***
Say ye:  We believe in God and the revelation given to us and to Abraham, Ismail, Isaac, Jacob, and the Tribes, and that given to Moses and Jesus, and that given to (all) Prophets from their Lord.  We make no difference between one and another of them, and we bow to God.
***
Relate in the Book (the story of) Mary, when she withdrew from her family to a place in the East.  She placed a screen (to screen herself) from them:  then We sent to her Our angel and he appeared before her as a man in all respects.  She said:  I seek refuge from thee to (God) Most Gracious:  (come not near) if thou dost fear God.  He said:  Nay I am only a messenger from thy Lord (to announce) to thee the gift of a holy son.  She said:  How shall I have a son seeing that no man has touched me and I am not unchaste?  He said:  So (it will be):  thy Lord saith:  That is easy for Me:  and (We wish) to appoint him as a Sign unto men and a Mercy from Us:  it is a matter (so) decreed.
***

In conclusion, we were asked to find a fellow attendee we didn’t know and share our impressions with each other for a few minutes; my confidante was a young woman from a Sufi community.  And then Andrew invited the presenters to give a closing thought if they wished.

It was hard to believe we had been there less than an hour and a half when it was time to schlep the refreshments from the main church building, set them up, and refresh ourselves with them and conversation. And less than half an hour later when we headed for home.
Posted by Mycroft Masada at 11:30 PM No comments:

Posted by Mycroft Masada at 5:32 PM No comments: