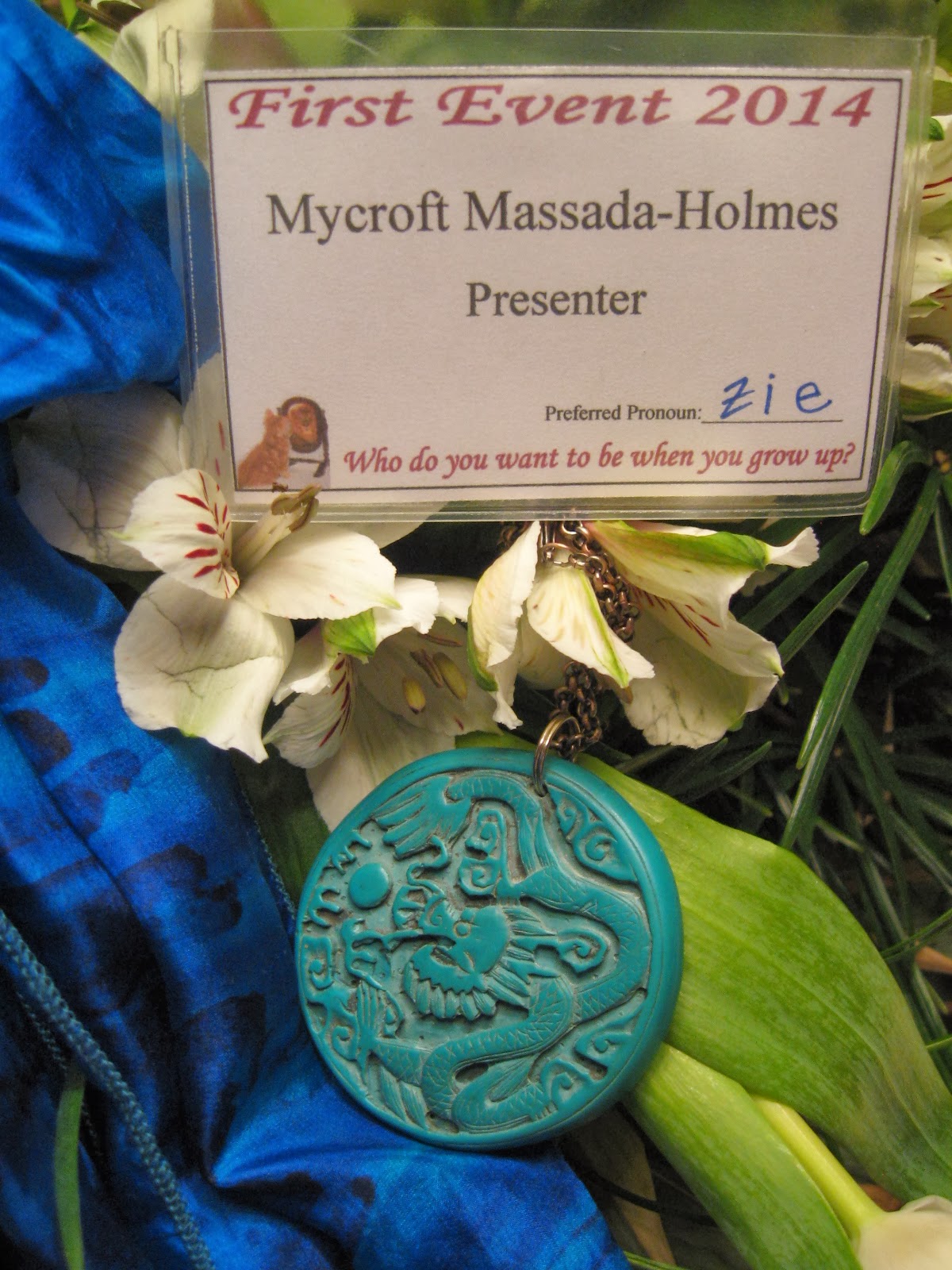 This year’s First Event theme was “Who do you want to be when you grow up?"  When I grow up, I want to be someone who wears stoles and dragon jewelry and presents at conferences – so that’s going well.
Alas, I forgot to ask about taking a picture of our panel. And we looked especially fabulous, too.
(And yes, that's an extra "s" in my nametag -- for...savings?)

First Event 2014 : Who Do You Want to Be When You Grow Up? started this Wednesday, and ends tomorrow, at the Marriott in Peabody MA (on Boston’s North Shore).

I co-facilitated a workshop today with Bobbi Taylor and Raven Kaldera – “Gender, Self & Spiritual Community: Intertwined Narratives” – “How have our life stories of gender and spirituality been woven together…or come undone?  What does it mean to have a spiritual community that affirms diverse gender identities and presentations?  This will be an opportunity to share questions, experiences, inspiration and support, as well as learn how to connect with local and national trans faith work.”

Bobbi is a transgender activist living and working in the Boston area with formal training in Zen Buddhism, evangelical Christianity, and Paganism. In addition to being a housewife, spouse, and father, Bobbi is also a member of various committees of the Massachusetts Transgender Political Coalition, including the Interfaith Coalition for Transgender Equality.

We had an hour and twenty minutes, and about a dozen people in attendance, plus a few more who left early.  Bobbi introduced the workshop and presenters, she and Raven and I spoke about our stories for a few minutes each, and then we engaged the attendees in questions and answers and discussion.  As always, it clarified the need for more inter/faith discussion spaces for trans people.  I was particularly impressed by how we were all able to hear some very queer things from each other (in many senses) and yet respond from places of genuine appreciation and reciprocation.

It was also very good to work in this way with Raven – although we go way back together, first meeting at a trans support group at Arlington Street Church (UU, Boston) in the 90s(!), we haven’t really worked together directly before; I’ve been to his annual FTM Camp-Out, we’ve had a bit of email about the faith campaign for MA trans rights legislation, and I’ve been in his audiences several times.

For some reason I didn't tell a very interesting version of my story, especially in context.  Although, in fairness -- this is Raven we’re talking about, right?  He looks and sounds like he just stepped out of Game Of Thrones or something, only far more awesome.  Bobbi’s saga was and is pretty epic as well, and her outfit was quite nice.  And on the third hand -- I should be glad that one really can't tell an uninteresting version of my story, nu?

And the Mass Trans Political Coalition staff did a secular workshop on Friday – “The State Of Trans Advocacy”.

I would have liked to attend more of the conference -- indeed, all of it -- and maybe I should have, especially as it was my last one for the foreseeable future (as I am moving to Washington DC at the end of the month).

Also?  Don’t forget to fill out FE’s survey about your experience of this year’s con!
Posted by Mycroft Masada at 7:00 PM No comments: