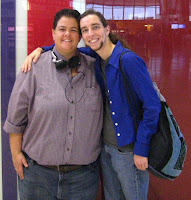 Julia McCrossin and I at the end of our first in-person visit – September 15th, 2009; our 6th anniversary is July 5th.

Not a fan of legal marriage, or much of the “marriage equality” movement, and their roles in oppression, in this country and the rest of the world. But that’s the thing – legal marriage is a necessary evil for many, including us -- especially as we live and are the primary caregivers with my mother-in-sin -- and probably will be for years, and I’m glad that we can now legally marry in all the States instead of just our home ones (MA and MD).

Big fan of faith-based and other non-legal / other-legal marriage/partnership rituals, including those involving more than two consenting adults.

I’ve always wanted to have an engagement, wedding and marriage, and Julia is my Bashert in that way as well. We don't fully qualify for marriage in either of my faiths -- Judaism or the Episcopal Church – and that may not change in time, but we plan to have some sort of Trewscopalian and otherwise interfaith wedding anyway. And then again, queer/trans/fatphobic discrimination in employment needs to change enough for us to afford even the thriftiest wedding.

Cameron is also a fellow member of TransEpiscopal, and part of TE's team at the Episcopal Church's 78th General Convention. And he’s one of the faith leaders we want to be part of our wedding ceremony.

“I would love for more people to think about marriage as a vocation, one among several--not the only relational vocation there is, by any stretch, but one to be discerned carefully, and when discerned as your vocation, to be lived into joyfully.

As I’ve interacted with some of the provincial meetings, I’ve had some questions bubble up around the role of procreation and marriage. There are lots of really interesting angles on that. I really emphasize the rubric of adoption. That is the mechanism of our baptismal incorporation into Christ’s body. It’s adoption--choosing God and being chosen by God and choosing one another--through which we create family as Christians. When you look at family, and you look at marriage, and you look at having children through that lens, it’s all adoptive. And if it happens to be biological as well, wonderful, fabulous—and it’s adoptive. We have to choose one another again and again and again over the course of our lifetime. I notice that has come out in some of the questions where people have wondered if somehow marriage equality would undermine a place for procreation in our understanding of marriage, and my answer is, not at all. In fact, it really underscores the adoptive mechanism through which we choose one another, whether we discern a call to have children or not.”

And thanks to TransEpiscopal, I also saw and deeply appreciated Iain Stanford’s “A Crack in Our Current Practice: A ‪‎Trans‬ Angle on ‪‎Marriage Equality‬ in The ‪Episcopal‬ Church."

Iain too is a fellow member and leader of TE and part of our team at #GC78‬.

“The shift here is not a theological one. It is not about Augustine’s theology of the goods of marriage or even Elizabeth Stuarts’ theology of gay and lesbian relationships as “just friends.” The shift is my physical body. My negotiation of gender has shifted from the outward and visible sign of a woman to that of a man, more specifically a trans man. My own sense of gender exceeds binary definition. I own my full gender history. My story, while common in trans communities, is not as well known outside of those circles. I am proud of the ways I participated in breaking down barriers for women in the 1980s, even if only in small ways. I was one of the few women who studied engineering in those years, and the first to be elected president of my university’s engineering honorary. Today, I live and move mostly as just another short white guy. To know me is to understand that I am the sum of all my years.”
Posted by Mycroft Masada at 8:00 PM No comments: