May Chris Hannon's memory be a blessing 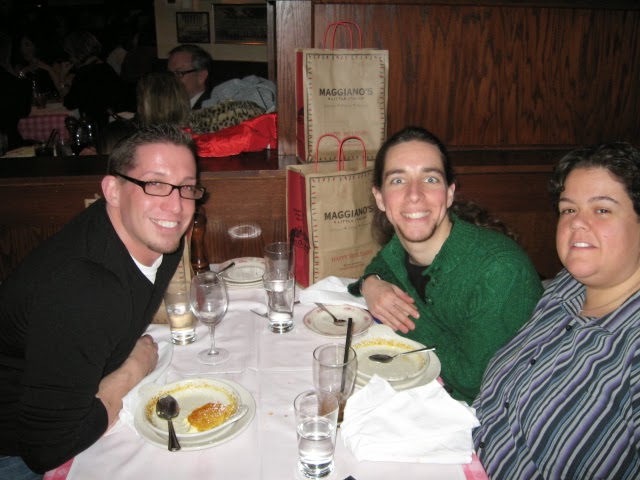 Here we are with Chris in December 2009 in Boston; Julia and I first met that July. (And this was the day after C's first date with his fiance!) As it turned out, this was the only time that C and J met, partly because J and I were long-distance until a year ago, so now I'm even happier that it happened.

I learned today that Chris Hannon, one of the very best friends and family members I’ve ever had, passed away last night, and that he had taken his own life. We met as high schoolers at BAGLY (Boston Alliance of GLBT Youth) in the early 90s; he was already an impressive leader. He was 37, a year younger than I.

Obituary and arrangements are here – visiting hours Thursday and funeral mass Friday, both in his native Dorchester; internment private; in lieu of flowers donations to MSPCA-Angell.

I hadn't interacted with Chris since I moved to DC a year ago, after a lifetime in Boston, though I had intended to every day and could and should have. I loved and missed him, thought about him every day and often saw him in my dreams. I am oh so much sorrier about my avoidance now.

Especially as I knew this had been and maybe was a risk -- he had always struggled with a depression that was particularly hard to treat, and it was complicated by other issues. But I had thought/hoped that he was finally at a treatment and life place where this wouldn’t happen, even if it could. He was engaged, they had dogs…and so on and so forth. And he was very high-functioning, if anything too much so, and was an extraordinary person. An amazing friend, sister, amateur therapist; thinker, reader, writer; compassionate, generous, smart. And so funny and so fast! Indeed, in many ways he reminded me of Robin Williams.

And yet he struggled with feeling not good enough, including for me, with not being a consistent enough friend, with how to witness my happiness, especially since Julia. And I did struggle with his struggle, and his coming and going, and with not wanting to bother him too much, especially when he was happy, not to mention busy. I hope he knew how I still felt. I believe he knows now, but that is somewhat cold comfort.

I can't afford to go Boston, as I am yet again searching for paid work. But I am making cards to send, and seeing how else I can be supportive. And I have good support myself.

But like many others have expressed here, what I want most of all is for Chris to return, how much more so never to have left. May his memory be a blessing, as we say in Judaism.


Posted by Mycroft Masada at 8:00 PM No comments: