Fairness For All Marylanders Ash Wednesday 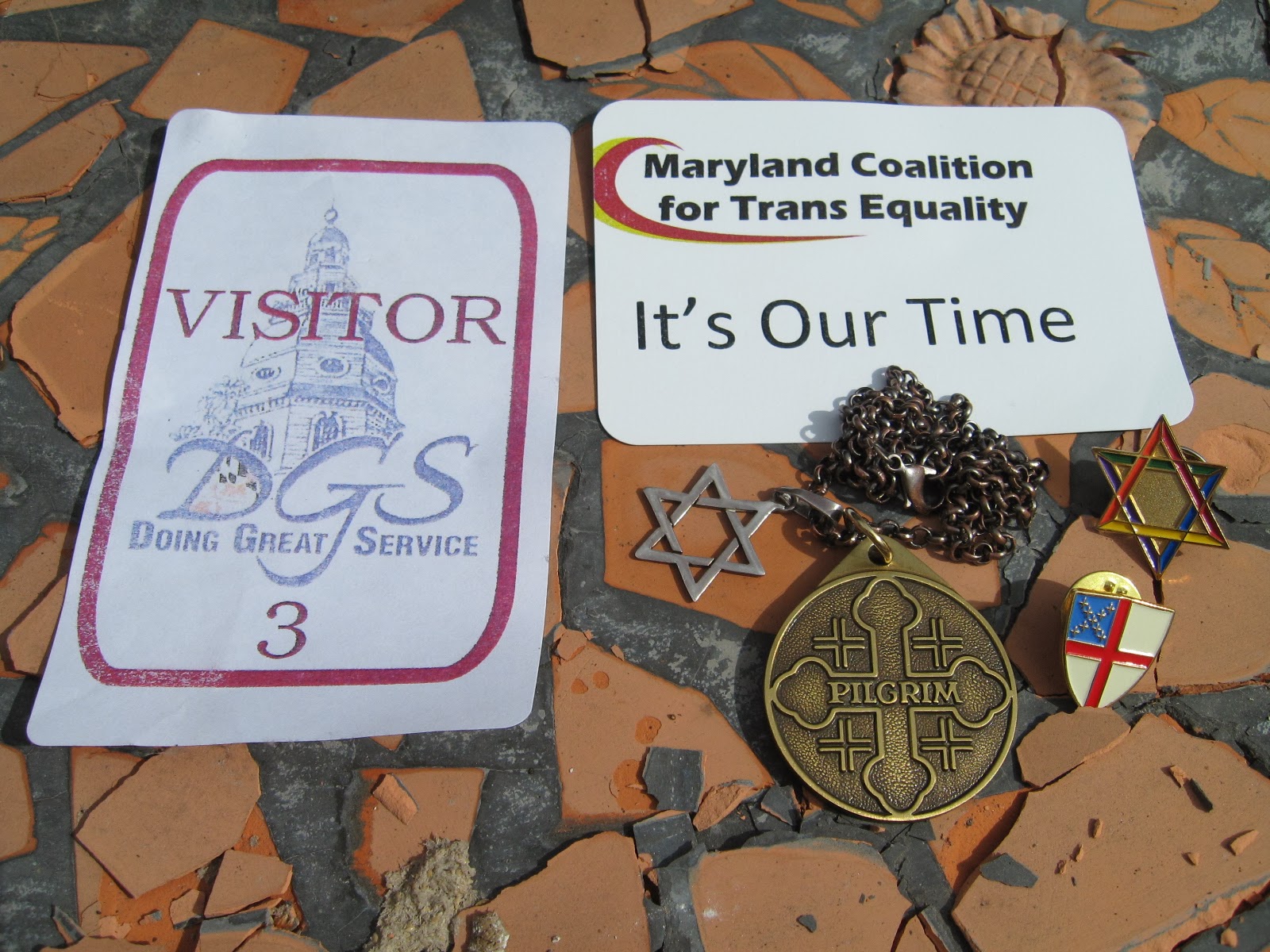 My faith flair and stickers from today's hearing – all of which I wore to church as well.  The rainbow magen David pin was a gift from my cousin Andy in California many years ago, the silver charm I bought in Mexico City in 2003; the brass Jerusalem Cross / “Pilgrim” medallion was a gift to  participants at the Washington National Cathedral’s Epiphany retreat I went to in 2011 (while Julia was working there; the other side says "Thou art the journey and the journey's end / Washington National Cathedral"), the Episcopal Church shield pin I bought at the Cathedral’s gift shop with J.

“For all false judgments,
For uncharitable thoughts towards our neighbors,
And for our prejudice and contempt toward those who differ from us,
Accept our repentance, Lord.”

What an extraordinary day.  “Intense and wondrous”, as a colleague commented on my Facebook post about it.

My partner Julia McCrossin and I testified at the Fairness for All Marylanders Act’s House hearing and attended our first Ash Wednesday service.

The Fairness for All Marylanders Act (FAMA, Senate Bill 212 / House Bill 1265; #FAMA14) would update the state’s anti-discrimination laws to  include gender identity and therefore transgender and gender non-conforming people.  This has been the bill's best legislative session yet, and this really seems like the year it could pass!

I’ve always lived in Massachusetts, and have been one of the leaders of the faith campaign for MA’s trans rights bills.  I moved to Maryland in January to begin living with Julia, a lifelong MD (and DC) resident.

FAMA was passed by the Senate yesterday!  The next step towards passage into law was its House hearing today, before the Health and Government Operations Committee.  We had submitted written testimony in the form of letters through Equality Maryland -- lead member of the MD Coalition for Trans Equality -- and they asked us to testify orally as part of the several themed panels of supporters they were planning.  Click here for more about MD’s bill and our experience thereof – including our written testimonies.

We actually tried to receive our ashes before the hearing, but alas, the scheduling didn’t seem to quite work – the Episcopal Church was doing “ashes-to-go” at a few of our local Metro stations, they and other local churches were offering a few services each, and there was the EC right near the Statehouse (St. Anne's), but they all seemed too early or late for us.  At least if we were going to attend the whole service – that is, if it wasn’t ashes-to-go, we didn’t want to…ash and dash?  Is that the equivalent of “chew and screw”?  Too, what about the ashes washing off when we showered etc.?  If we ashed before we physically readied for the hearing.

We drove to Annapolis only to find all three parking lots full and little hope of street parking – but there was plenty of space left at the Navy-Marine Corps Memorial Stadium lot, and the parking attendant was quite friendly because she appreciated that we had actually read and followed the directions on her sign.  We’d just missed the tourist trolley, but another one came in a few minutes.  And maybe this was at least a little bashert, because there was a Blue Angels plane on display, and I had time to photograph it for my father Bill Wasserman, who flew with them as a photographer when he was in the Navy from 1960 – 2.  (We also found a gold tie clip with the image of a gramophone, which I haven't found through Google.)

We arrived at the Statehouse with time to spare because the full House session had run over.  We checked in with some of the MCTE leadership and our fellow panelists, pulled ourselves together, and found seats together in the hearing room.  We the bill’s supporters had two panels of legislators and other politicians, then one of trans people, myself included; the testimony table had four chairs and three microphones, so four trans women went first, then Equality Maryland’s Director of Advocacy and Programs Keith Thirion and I took our turn.  Then there was a panel of trans people’s family members, which Julia was a part of, in addition to identifying herself as someone with a gender non-conforming expression.  The supportive panels continued for several more, and were all quite impressive, including their responses to the Committee’s questions.

A particular highlight – and reason the parts of the day felt such a whole – was that the one person I knew from before my move was my trans faith colleague Donna Cartwright, co-chair of TransEpiscopal, of which I’m a member; she testified on the Labor-themed panel, representing Pride At Work.  And Julia had met her at a TransFaith event in Maryland in January.

Then the opposition presented a few panels…oy gevalt.  Let’s just say, for now, that I’m glad the person sitting on my other side gave Julia and I a trigger warning before they began.  It wasn’t anything I hadn’t heard before (especially at the MA bills’ hearings) or expected to hear, or couldn’t handle, but even so.  It wasn’t anything anyone should have to hear – or feel they have to say.  But that’s the thing – if nothing else, the opposition panelists made it clear to even some of the opposition legislators that they were saying things that shouldn’t be said.

We were the first bill of eight, and our bill’s part was all of a piece with no breaks and took a little over three hours.  And for the most part it was all quite well done.  And thus I must say, that although I know that Maryland’s process has its problems -- including some of which I’m not yet aware -- compared to Massachusetts’ meshugaas it’s a beautiful thing!  If this was MA, we’d almost certainly have missed the rest of Ash Wednesday, and been lucky to get home in time for bed – no matter where we lived in relation to the Statehouse.

We checked out with a similar group of people – including getting a sense of the bill’s next steps and the opportunities to volunteer therein, pulled ourselves together again, and went out to wait for the trolley.  While at the Statehouse complex stop with several strangers, we were approached by someone presenting as an older, conservative, petite white woman dressed for business – she identified herself as a Statehouse employee who had been in the hearing room or listening to / watching the broadcast, thanked us a few times for our work and bravery, apologized for the opposition testimony, assured us they didn’t represent everyone, and wished us good luck with the bill.

Even with some rush hour traffic, we were home in time for dinner and a little more work and rest.  And then it was off to the Episcopal Church of the Ascension’s Holy Eucharist and Imposition of Ashes (7:30 p.m. edition);  Julia has been attending since July, and I’ve attended with her a few times during my visits.  Somehow neither of us had been to an Ash Wednesday service or other observance before – we very much liked this one, and I was very pleasantly surprised by how much it was like Yom Kippur and the rest of the Jewish high holiydays.  Indeed, the priest used “mensch” in his sermon (and tends to make other good Jewish references).

And in another bashert moment, I realized that I was sitting at the window that looked out onto the church’s columbarium* wall and its attending angel – my mother and her parents, from the Episcopalian side of the family, were all cremated (*Julia actually taught me that word when I mentioned this).

And as I mentioned, we wore the day's outfits and stickers to church.  Click here for the PDF of the Service Bulletin.

The cantor, choir, Rev. Randy Lord-Wilkinson, and a few of our fellow congregants (out of the few dozen that were there) just after processing in and taking their places at the start of the service. 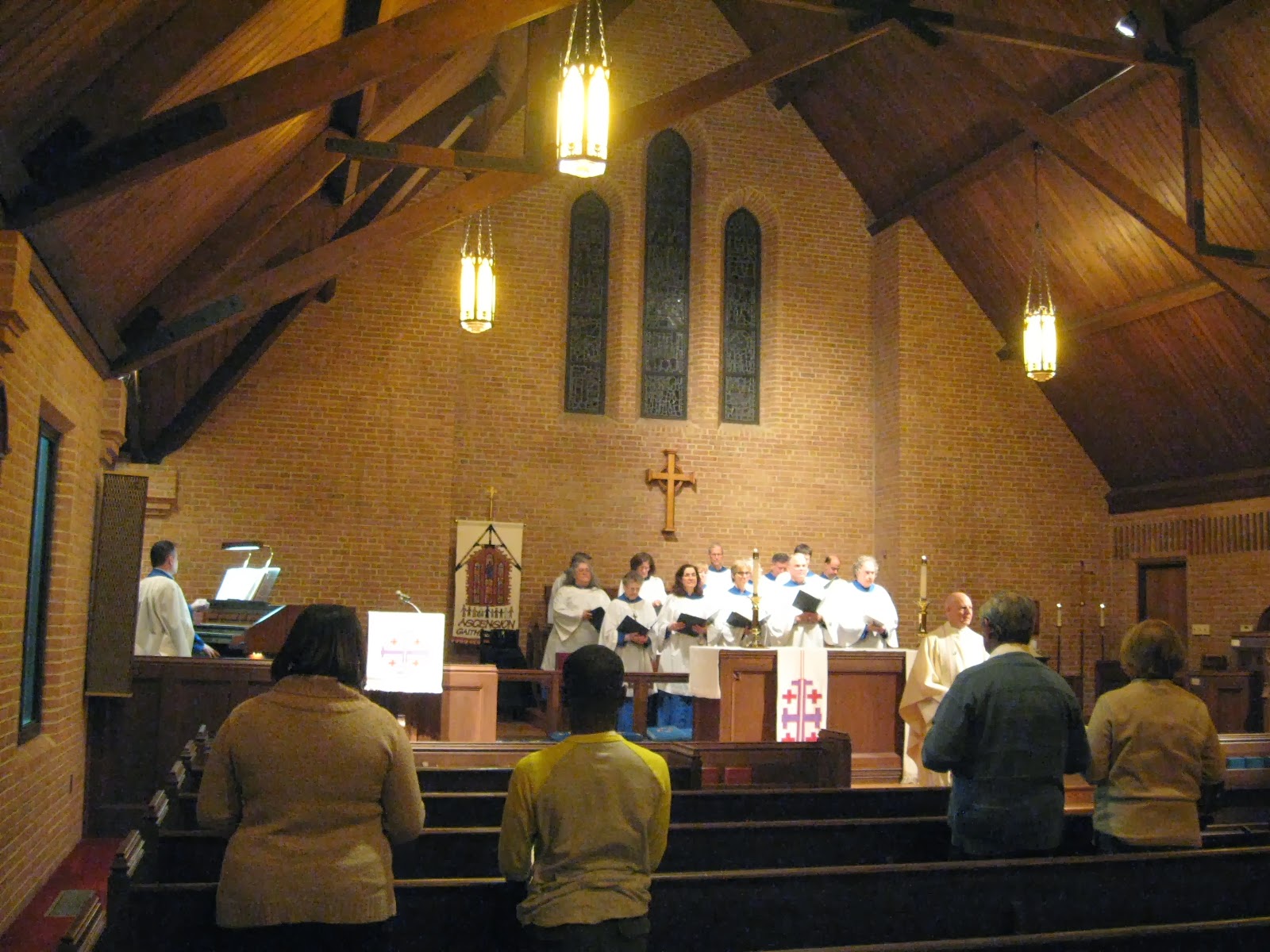