Happy 20th Birth Day to the Transgender Flag, and happy Trans Flag Day to everyone else! The trans flag was created on August 19th of 1999 by Monica Helms (todah rabah, many thanks). And five years ago today, August 19th of 2014, it was donated to the National Museum of American History (part of the Smithsonian). 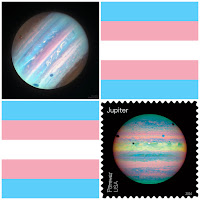 I'm doing at least seven trans-flag-themed posts on Facebook today (!). Including a reminder / FYI that the planet Jupiter is trans (according to NASA and the United States Postal Service), the trans-flag-themed stained glass panel I made at VisArts in February (and the ocean-inspired one my spouse Julia made), and our new trans flag crab magnet from Route One Apparel (because we're meshuggah Marylanders, though I lived in Boston until 2014). 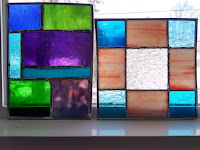 And yet no observance can be complete without our stolen sisters and other siblings -- at least 16 trans people have been murdered in 2019 in the US (joining hundreds more elsewhere), and 15 are Black trans women. Dana Martin, Jazzaline Ware, Ashanti Carmon, Claire Legato, Muhlaysia Booker, Michelle ‘Tamika’ Washington, Paris Cameron (along with Alunte Davis and Timothy Blancher, Black gay men), Chynal Lindsey, Chanel Scurlock, Zoe Spears, Brooklyn Lindsey, Denali Berries Stuckey, Tracy Single, Kiki Fantroy, Jordan Cofer, Pebbles LaDime 'Dime' Doe. We have also lost siblings to ICE, prison, suicide, and other plagues. May their memories be blessings -- and call us to act! Amen! 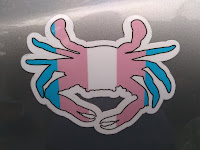