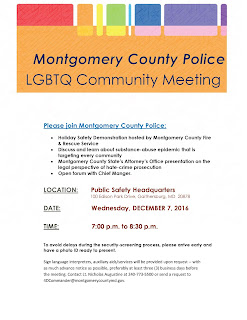 Tonight Julia and I attended the Montgomery County Police Department's third LGBTQ Community Meeting.  The first was in June, and the second in September; the next and fourth is scheduled for Tuesday March 7th, and the contact person is Lieutenant Nick Augustine at Nicholas.Augustine@MontgomeryCountyMD.gov -- a gay officer who speaks at and MCs these meetings.

There were no members of the media at all this time, apparently, and again less people (than last time, which was much less than the previous, first time); but hopefully that will change, especially as we continue to create the MoCo Pride Center (we have finally started an LGBTQ center for our county).  And, it is December and all!

The agenda included:
- A holiday safety demonstration by the Montgomery County Fire & Rescue Service (which I especially appreciated as my paternal grandparents and great-aunt died in the fire at Boston's Cocoanut Grove nightclub during Thanksgiving week of 1942; too, my brother is a firefighter and EMT in Ohio)
- A presentation on the current substance-abuse epidemic -- focusing on heroin, and including a demonstration of how to use the latest overdose-antidote delivery devices
- A Montgomery County State’s Attorney’s Office presentation on the legal perspective of hate-crime prosecution