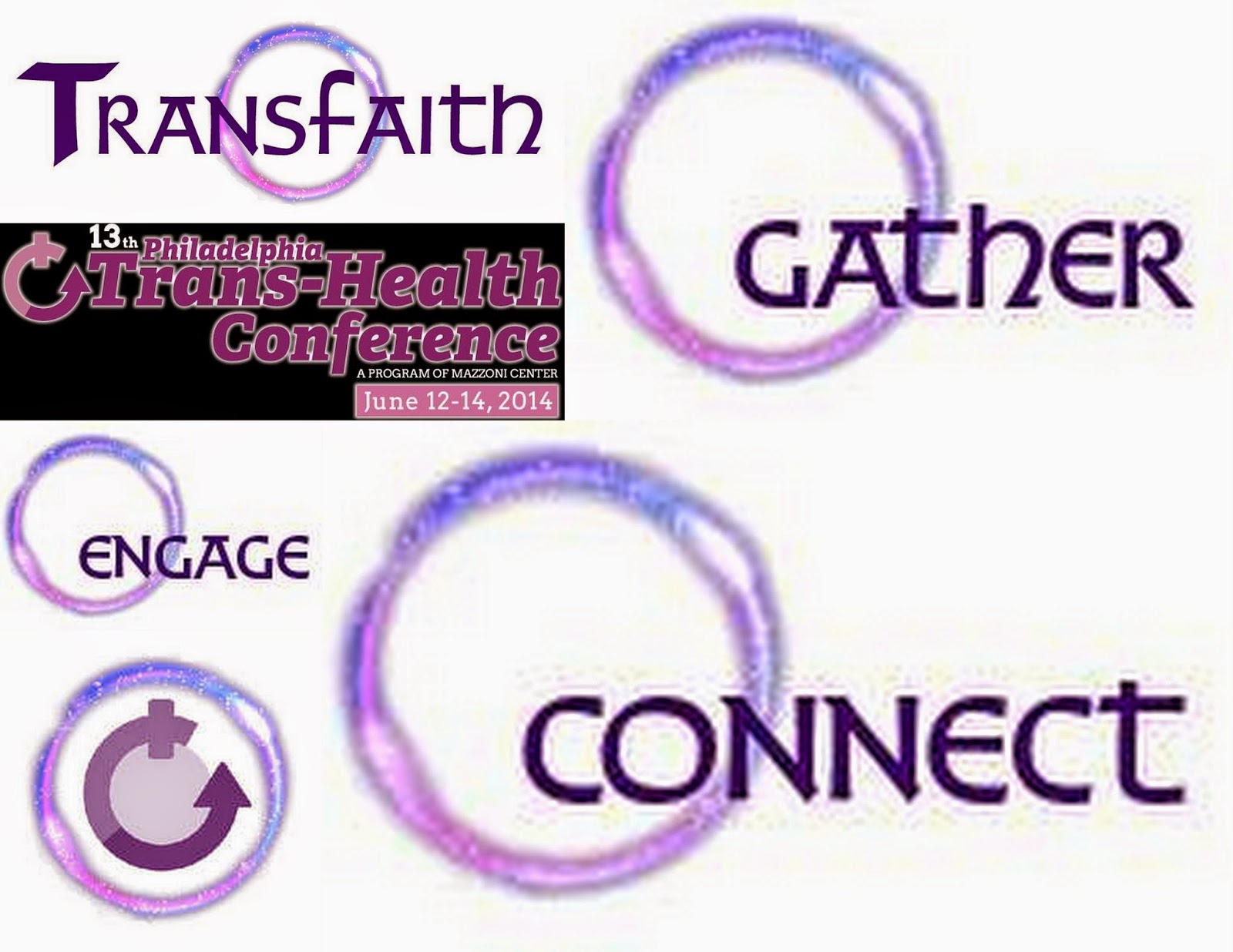 TransFaith is a national non-profit that is led by transgender people and focused on issues of faith and spirituality where I’m a Community Engagement Adviser, and today was our 6th annual Pre-Event for the Philadelphia Trans Health Conference.  And I was there – I've wanted to make it one of my annual events, but so far have only been able to attend in 2012.

The Philly Trans Health Con starts tomorrow and runs through Sunday.  I didn’t stay for the con this year, and have actually only been to it in 2012 too.  But you can click here for TF’s summary of the spirituality offerings – spiritual workshops and other options, the new Spirituality Room*, and the Shabbat services and dinner; and we'll have a table.  And there’s even more on the con’s website.  *Spirituality Room sched as of press time: 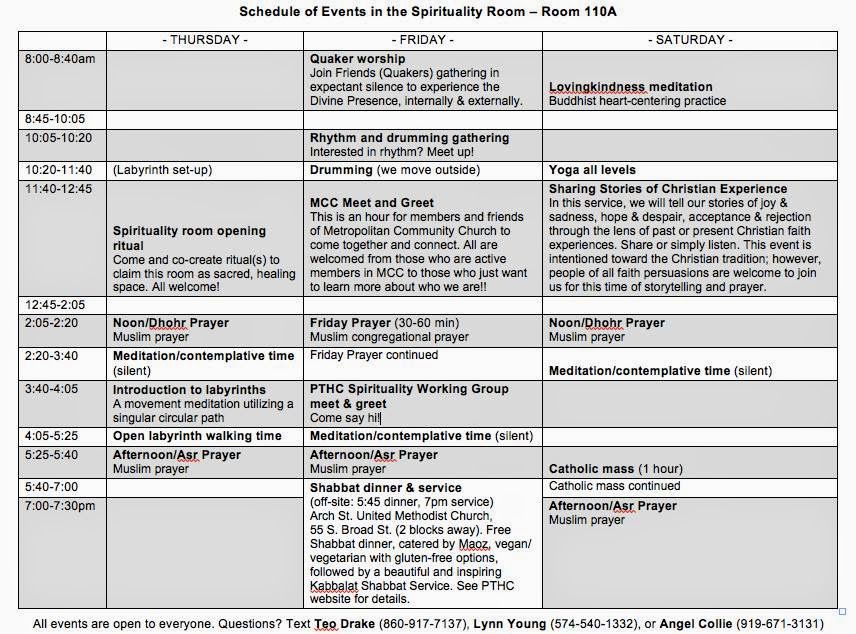 We had a table today, too, with materials about our suicide prevention education, as well as our multi-faith bookmarks.

I had hoped to be joined by my Julia, for her first TF pre-event and/or PTHC, but we are still searching for paid work, so I took the train up and back.  Which was a first and fun -- I’ve only taken trains a bit, and never to Philly; indeed I've only been to Philly the once.

I arrived at the William Way LGBT Community Center* in time for the informal gathering at 2:30, and the more formal event from 3 to 6.  And we did what it said on our tin.  “We will gather and discuss thoughts and considerations in creating meaningful ritual in gatherings of diverse people -- religious, spiritual, non-spiritual. Louis Mitchell and Lynn Young will facilitate a discussion about religious privilege among other types of often unconsidered privileges. We will create ritual together and share a meal.”  Though sadly Lynn couldn’t make it today – but should arrive in time for the con.  Louis is our Director of Community Engagement.

*I love that the WW's site is “waygay.org”.  It's also nice to visit them again as Boston actually doesn't have a queer center, and hasn't since before my time; and I haven't been to DC's center yet.  And WW has the feel of one from the 70s/80s -- as well as many other times including the present -- which I've been particularly thinking about since seeing "The Normal Heart".

We were a pretty diverse circle of 15, including a child (a relative of one of the other participants).  We introduced ourselves, talked about what ritual means to us, got into pairs to brainstorm a list of the privileges we have, and came back together to share some of that.  Then we broke into two groups to actually create a ritual, using some basic dollar- / craft-store items – glass pebbles, tea lights, pipe cleaners, Mardi Gras necklaces, colored cloths, river rocks, etc. -- as props, that we then shared with the others by demoing it and then inviting their participation.  We paid particular attention to creating a ritual that was as accessible as possible, keeping in mind our previous work about privilege.  It was amazing to see how well it all turned out – not only the demos but the more-real tests with the other groupies – as well as to see how much we had to learn.  In the other group’s ritual, each person was invited to share what they brought to and took from our gathering.  In mine, each could share the journey they were beginning, and ask the rest to give them what they needed for it.  I kept a black river rock as a souvenir, which was an option; it will live on the windowsill in my home office.

We had a good spread of snacks the whole time, and at the end a great Middle-Eastern-themed dinner of falafel balls, hummus, pita breads, Brussels sprouts and more.

Dessert was quite the surprise.  Long story short so as not to ruin said surprise – the Experience is being offered at the con and elsewhere – one of our number had had an experience while using their Barbie cake mold in which Barbie revealed that she was actually an intergalactic trans-gender warrior who has been trapped by our world’s oppressive role for her and wants to be freed.  We took a chocolate cake baked in this very mold, food-colored our own bits of all-natural vanilla frosting, and applied them to the cake to symbolize the powers we were inspired to restore to the Warrior.  Check out the Inter-Galactic TransGender Warrior Cake Decorating Experience on Facebook, part of the Mind Body Spirit Travelling Arts & Craft Circus.

Here is my collage of our cake – while taking the initial pics, I noticed that my phone’s cam had a magic wand button, which brought up the Black-and-white and Sepia options, and of course I had to try those; alas, I missed the Negative option. 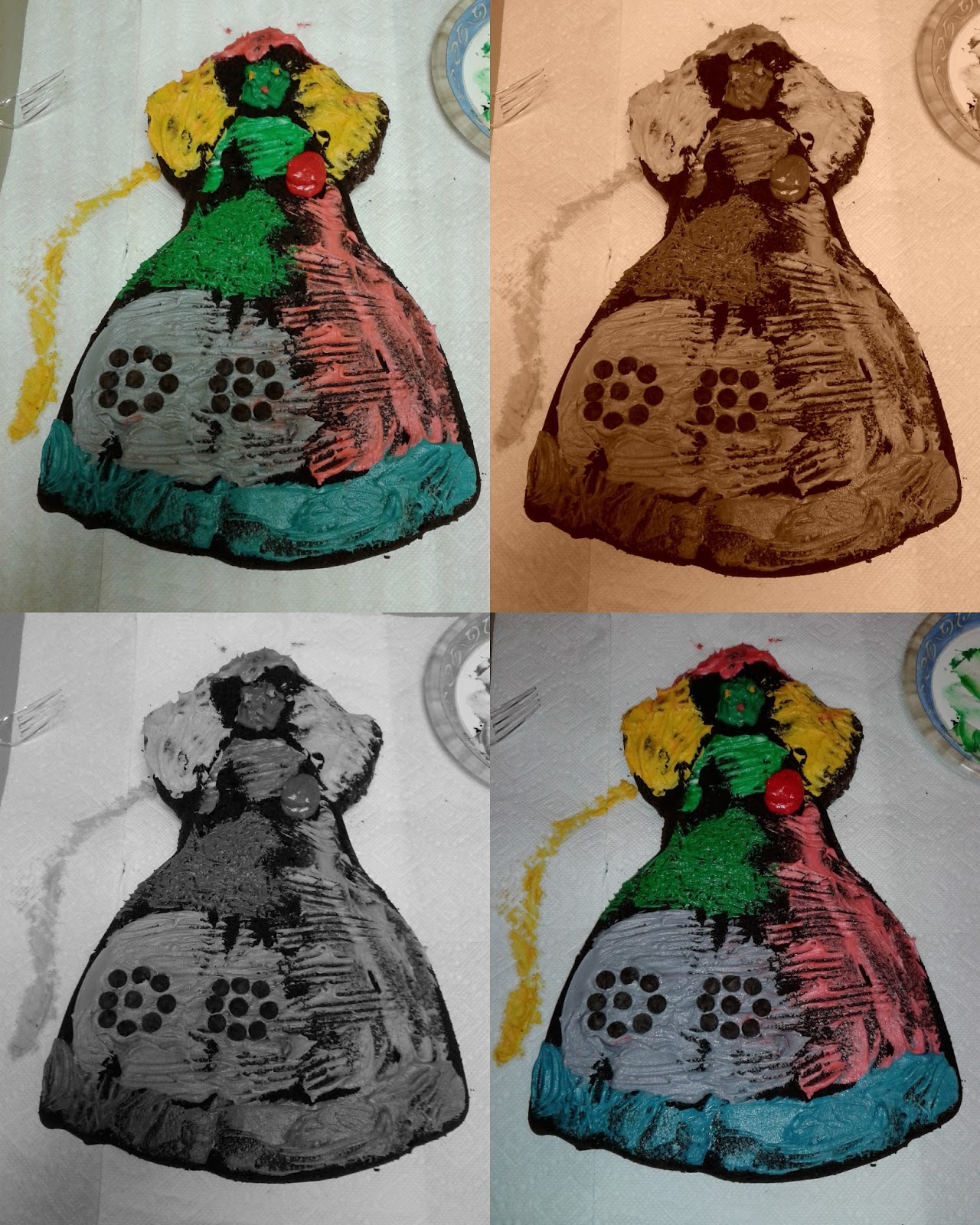 I wish I/we had taken more photos of more things, but the fact that we didn’t is largely a testament to what a good time we were having.  And not taking photos of participants is also an issue of safety and more.  But I do need to remember to step up and offer my shutterbugging as service, as appropriate.

Then it was cleanup, some time with some of my closer colleagues, and back to the station to find a Philly pen for my casually pen-collecting partner.

I’m really glad that this event happened again and that I made it!  It was especially good to see my Massachusetts and other colleagues in person, which didn’t happen very often even before I moved to DC in January.  I met some new people today, too – including some I hadn’t even know about.
Posted by Mycroft Masada at 11:30 PM No comments: