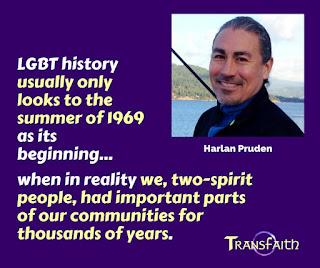 Harlan Pruden:  "LGBT history usually only looks to the summer of 1969 as its beginning ... when in reality we, two-spirit people, had important parts of our communities for thousands of years."

I was privileged to attend one of Harlan's workshops at the 2012 Philadelphia Trans-Health Conference. One priceless moment was his comment on how in some Native cultures, the male warriors would dance for Two Spirit people like himself before battle. Striking a pose, he pointed out that although the US has been in many wars during his lifetime, he is still waiting for his dance.‪

As we give thanks today, and every day, may we be mindful of the infinite gifts the First Nations have given and continue to give this nation -- and how much we have taken and continue to take from Native people. Even many of us in the social justice community have been remiss in this, even as we focus on particularly intersectional aspects like racial, climate and sex / gender / sexuality justice.

Today I am especially thankful that, despite my many failings as a partner in social justice, Indigenous communities have given me much. From my namesake Aunt June, a fellow Anglo who lived and worked on the Navajo reservation in Arizona for many years (and still lives in Nevada); to the United American Indians of New England (Massachusetts is my home state); to the Two Spirit community of TransFaith, and beyond.

Todah rabah, many thanks.

This is Transfaith’s main piece about remembering ‪#‎TwoSpirit‬ traditions this season, which links to our Indigenous website section and highlights a few pieces therein.  I'm a Community Engagement Adviser at TF.

I listened to Native America Calling’s February show about Transgender Native Americans in March, after hearing about it from Transfaith (where I’m a Community Engagement Adviser), and learned a lot. ‪

“Before assimilation, two-spirit people, including those who identify as transgender, played very important roles in tribal communities. Transgender people now face discrimination. According to a study by the National Center for Transgender Equality, over half of transgender people have attempted suicide.
In today’s show, we talk about the struggle to regain that historical acceptance and celebrate our Native people who call themselves transgender. We will also look at the roles of transgender people in their communities today. Guests: Ty Defoe (Oneida and Ojibw) – artist, social activist, musician and writer; tradition keeper Sydney Freeland (Navajo) – Director and writer of Drunktown's Finest; Robyn Silverfox (Navajo) – pre-med student. Break Music: Too Much To Feel (song), Klee Benally (artist), Respect Existence Or Expect Resistance (album).”

Kol hakavod and yasher koach to to those in body and spirit at National Day of Mourning 2015 (in Plymouth MA). I’m ashamed to say I’ve never been there in person, though I lived in Boston from birth until January 2014; I hope to remedy that one day. May they have a meaningful fast and feast, in whatever forms that takes for each.
Posted by Mycroft Masada at 12:30 AM No comments: