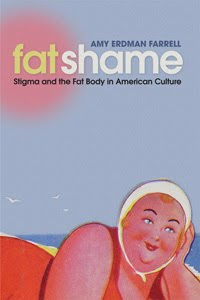 Amy Farrell is Professor of American Studies and Women’s and Gender Studies at Dickinson College in Carlisle, PA. She is also the author of Yours in Sisterhood: Ms. Magazine and the Promise of Popular Feminism. She lives in Carlisle with her husband and two children.
Her new book is "Fat Shame (Stigma and the Fat Body in American Culture)". My partner (Julia McCrossin, Fat Studies scholar) and I are looking forward to reading it.
Here's the book's publisher's (NYU Press) page:
http://nyupress.org/books/book-details.aspx?bookId=1613
Here's Amy on "The Colbert Report" (May 4th episode):
http://www.colbertnation.com/the-colbert-report-videos/383684/may-04-2011/amy-farrell
And here's the book's description:
"To be fat hasn’t always occasioned the level of hysteria that this condition receives today and indeed was once considered an admirable trait. Fat Shame: Stigma and the Fat Body in American Culture explores this arc, from veneration to shame, examining the historic roots of our contemporary anxiety about fatness. Tracing the cultural denigration of fatness to the mid 19th century, Amy Farrell argues that the stigma associated with a fat body preceded any health concerns about a large body size. Firmly in place by the time the diet industry began to flourish in the 1920s, the development of fat stigma was related not only to cultural anxieties that emerged during the modern period related to consumer excess, but, even more profoundly, to prevailing ideas about race, civilization and evolution. For 19th and early 20th century thinkers, fatness was a key marker of inferiority, of an uncivilized, barbaric, and primitive body. This idea—that fatness is a sign of a primitive person—endures today, fueling both our $60 billion “war on fat” and our cultural distress over the “obesity epidemic.”
Farrell draws on a wide array of sources, including political cartoons, popular literature, postcards, advertisements, and physicians’ manuals, to explore the link between our historic denigration of fatness and our contemporary concern over obesity. Her work sheds particular light on feminisms’ fraught relationship to fatness. From the white suffragists of the early 20th century to contemporary public figures like Oprah Winfrey, Monica Lewinsky, and even the Obama family, Farrell explores the ways that those who seek to shed stigmatized identities—whether of gender, race, ethnicity or class—often take part in weight reduction schemes and fat mockery in order to validate themselves as “civilized.” In sharp contrast to these narratives of fat shame are the ideas of contemporary fat activists, whose articulation of a new vision of the body Farrell explores in depth. This book is significant for anyone concerned about the contemporary “war on fat” and the ways that notions of the “civilized body” continue to legitimate discrimination and cultural oppression."
Posted by Mycroft Masada at 5:30 AM No comments: