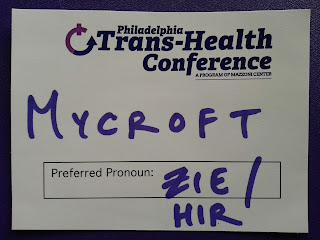 This week-end -- this Thursday through today, Saturday -- I went to the Philadelphia Trans Health Conference, which I mean to do every year, but had only done in 2012.  I actually arrived on Wednesday so that I could attend and facilitate at TransFaith’s 6th annual Pre-Event for PTHC – I’m a Community Engagement Adviser at TransFaith, and this year’s Event was particularly amazing because it included our first public conversation about fatphobia.

There were some workshops that I wanted to go to, but not as many as I would expect.  And what with everything, I actually ended up going to only one.  “Gender, Self & Spiritual Community: How Personal and Religious Narratives Can Intersect” had been through some miscommunication, and potential co-facilitator Teo Drake couldn’t be at PTHC at all – but dozens of people showed up in the Spirituality Room ready for it, so it’s good that the other facilitator Bobbi Taylor was available.  I think I could and possibly should have co-facilitated with her, but she was more than capable of doing it alone, and did so well – and she invited me to do a little shpiel about TransFaith etc. at the end.

The workshop was described thus:  “How does our gender and/or sexuality impact our experience of spirituality and spiritual community? How does a spiritual community that is truly inclusive of us express itself? This workshop will be a facilitated conversation led by people from a wide diversity of spiritual beliefs and religious traditions. Participants will get to hear how gender/sexuality impact faith, and vice versa, for all kinds of people. Break-out groups by particular traditions may be utilized, plus cross-tradition/path conversations. Explore in a multi-faith space the meaning in our different experiences of spirituality, faith, and religion as trans people and larger trans community.”

And Bobbi's bio was “Bobbi Taylor is genderqueer and has formal training in Zen Buddhism, evangelical Christianity, and British Traditional Wicca. The intersection of gender diversity and interfaith work is a subject near and dear to Bobbi's heart. Bobbi serves as Vice Chair of the Steering Committee of the Massachusetts Transgender Political Coalition and is an LGBT representative on the MA State Commission for Homeless Youth, among other roles and responsibilities. Part of Bobbi's work has been to help LGBT individuals reconnect with their spirituality and to make religious groups more inclusive and affirming.”

Friday night I went to the Shabbat dinner and service.  I helped organize it in 2012, as part of co-chairing the Con’s Jewish committee that year, which was the first time dinner was added to the event, and it’s good to see it continuing to go from strength to strength.

I spent most of the rest of my time at the TransFaith table, and at the house I stayed at with some of the TransFaith leadership -- an AirBnB home they’ve used for some years, which was a good home and family experience for we renters as well.  And one night we went out to dinner, and another we hosted an unofficial and informal party, based around gumbo and primarily attended by people of color.  In some ways I wish I had spent more / different time at the Con, or perhaps even elsewhere – but mostly I think it was for the best.  I also toured the other tables, and made it out to the Reading Terminal Market once – I wanted to spend more time there, but it is overwhelming and overcrowded, and since moving to Montgomery County MD (from Boston MA last January) I have Amish markets near me.  And I took the local public transit for the first time, and the whole time.  I didn’t see much else of Philly, and I never have, but I would like to one day.

I am sorry I’ve missed so much of PTHC, and glad I returned, and hopeful that I can return again next year and beyond.
Posted by Mycroft Masada at 11:30 PM No comments: