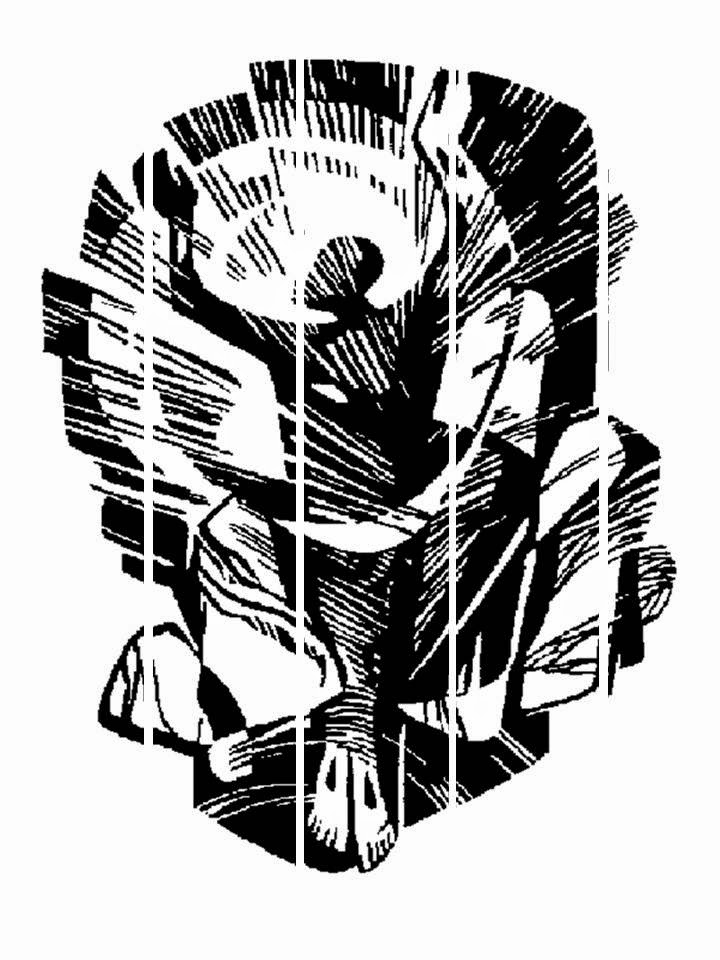 The image from the cover of the bulletin – for some reason it was made of these five pieces in the online PDF; I could have put the puzzle back together, but I thought it was better to do it this way (I copied and pasted the pieces onto a PowerPoint slide, arranged them like this, saved the slide as a jpg, and cropped it in Picasa).  My favorite thing about the image is that the person and the style of art look African / of color; and we do have a significant number of African members at Ascension.

We began our Easter Sunday by giving Julia's mum an Easter basket -- treats, toys, turtle bag and greeting cards (from us and her grandogter Ursula) from a dollar store; Cadbury Flake egg with four Flake bars inside from a mall candy shop that includes British imports. 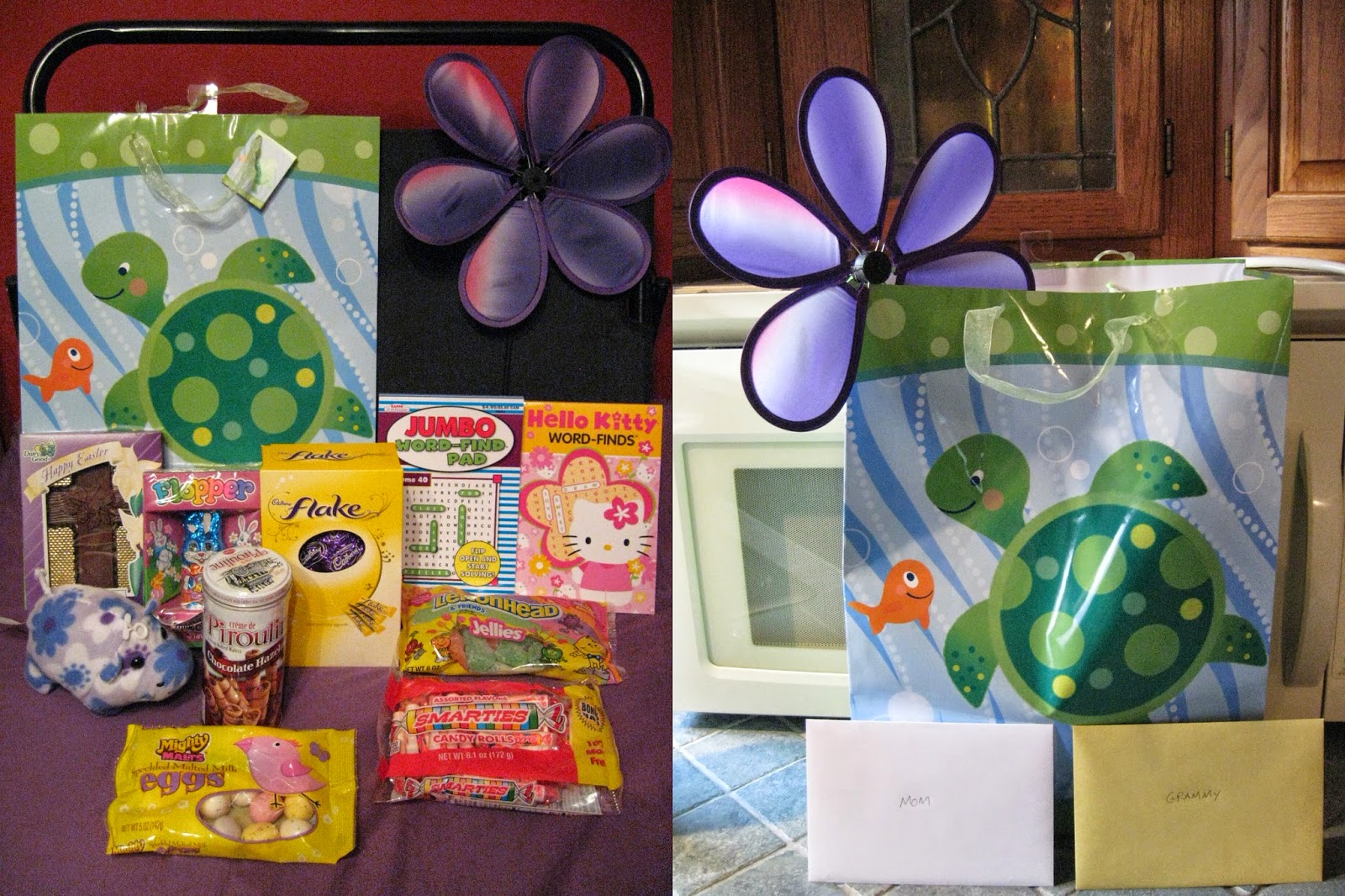 Here we are in our church clothes -- the last of our five church outfits each this week! Whew. J's purple pants (!) from Tommy Hilfiger via Casual Male XL (on clearance), tie from Geoffrey Beene via TJMaxx; my scarf from our local Goodwill of Greater Washington (tags cut off), jewels by Artemisia Studio (Emanda Johnson) of Etsy. 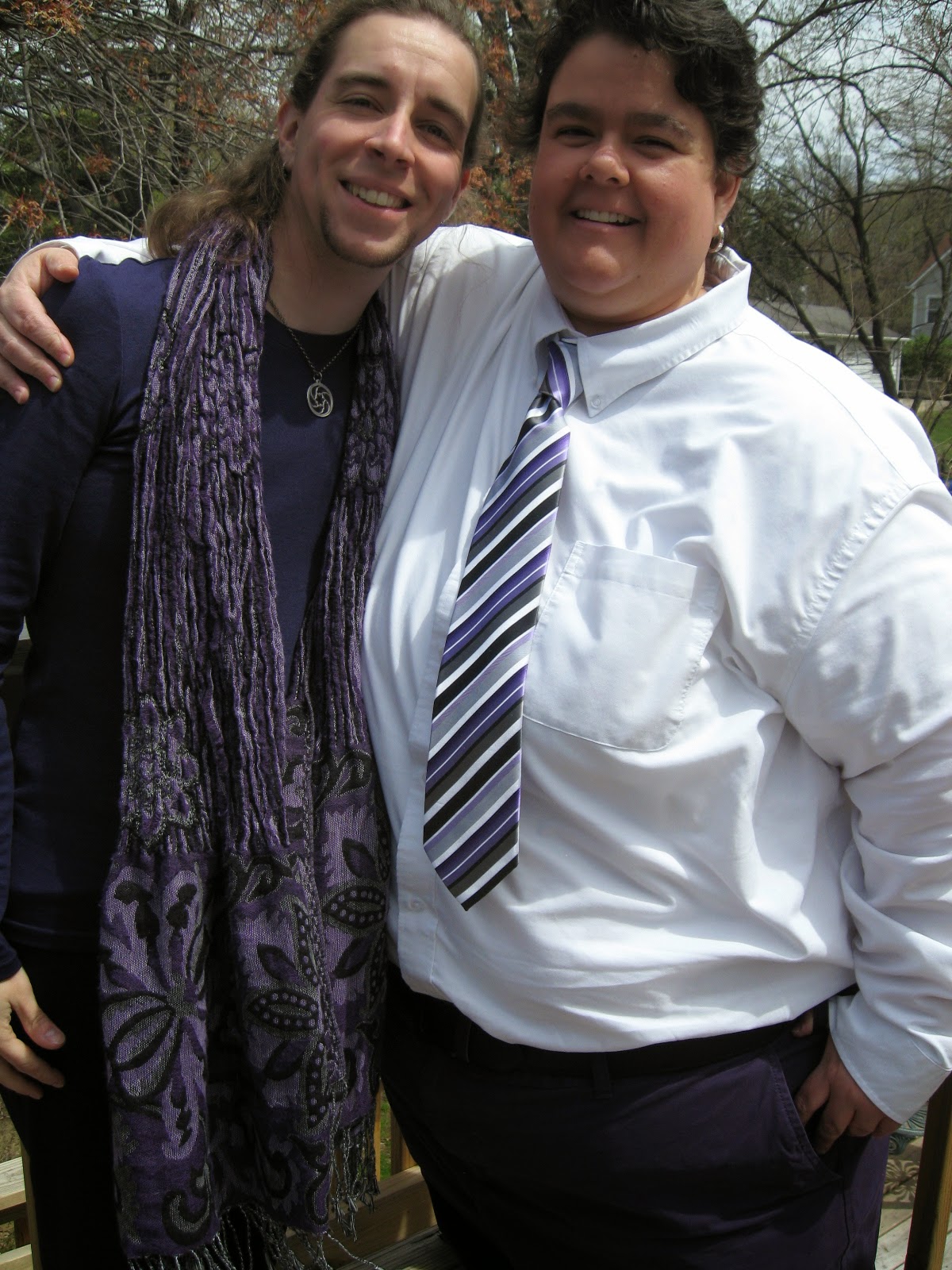 The table in the narthex with the bulletins about who gave Easter flowers in memory / honor of whom.  The plants are kalanchoes in orange – J’s mum has one as a houseplant. 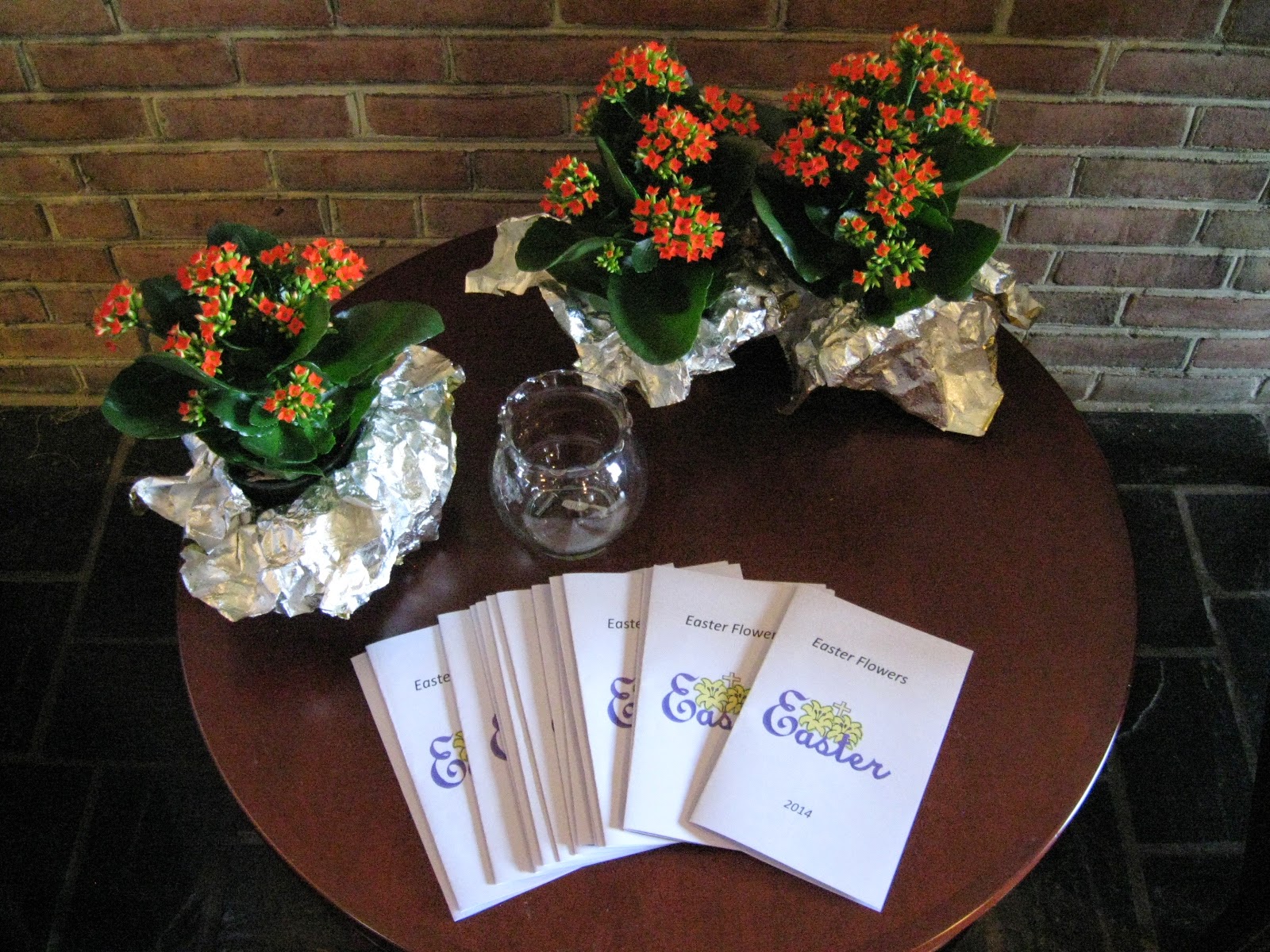 We went to the 11:00 service – there was also a 9:00, and we arrived so early (because as at many Easter and Xmas services, both were standing room only) that it wasn’t over yet.  So we got to see all of those people leave, and talk with the ones we knew.  It was particularly nice to see everyone so dressed up -- including a lot of purple.
Our new nametags – our first ones here, which became available at the service last night – came in handy!

The service was very good – though as high-churchy as we are, we would have welcomed even more “smells and bells”, including a thurible (incense burner).  And I liked that it was called The Sunday Of The Resurrection : Easter Day, like a movie.
Our usual musical suspects – organist / choirmaster / cantor and choir -- were joined by one of the several versions of the Sterling Brass division of Sterling Artists.
We were seated at one of the windows that looks out into the rest of that floor and down into the floor below – at one point I saw some adults and children in the seating area down there, the children with their empty baskets waiting for the egg hunt; we got to see more of them as we left, as they gathered in the pews for the Children’s Service at 12:30.
We heard John 20:1-18 in English and Spanish.
We prayed for those victimized by gun violence at the Jewish Community Center of Greater Kansas City and everywhere else.
Our priest, Randy, couldn’t get to us during the Peace to give us his usual hugs, so he gave us the peace sign with his hand – why didn’t I ever think of that?
Again we had a round loaf of bread instead of our usual pita – and this time J noticed that it had a design on top – three flowers with stems, she thought, maybe daisies.
All told, an hour and forty minutes (as opposed to about an hour), but it didn’t seem nearly that long, or too long; though we covered a lot of ground. 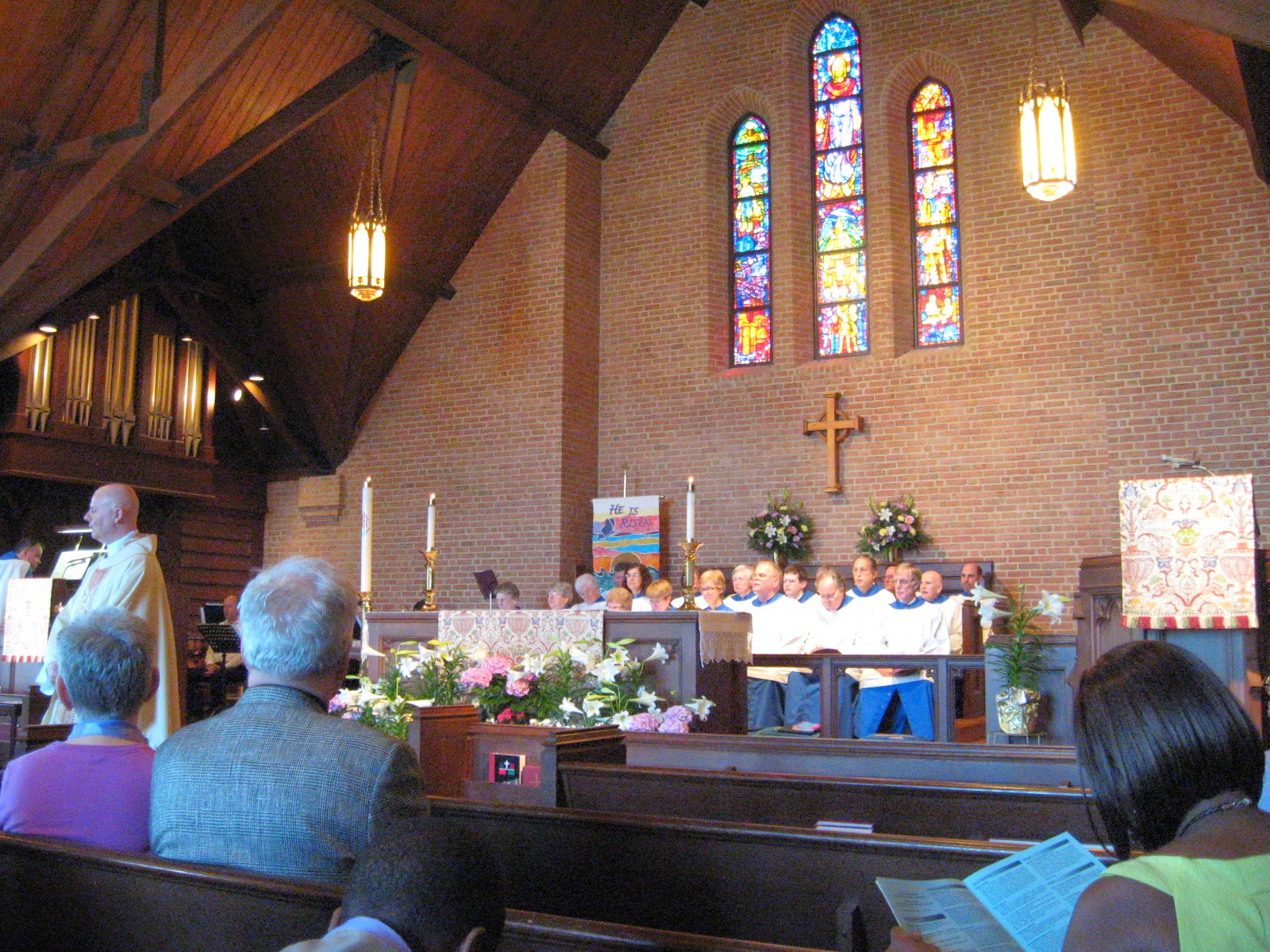 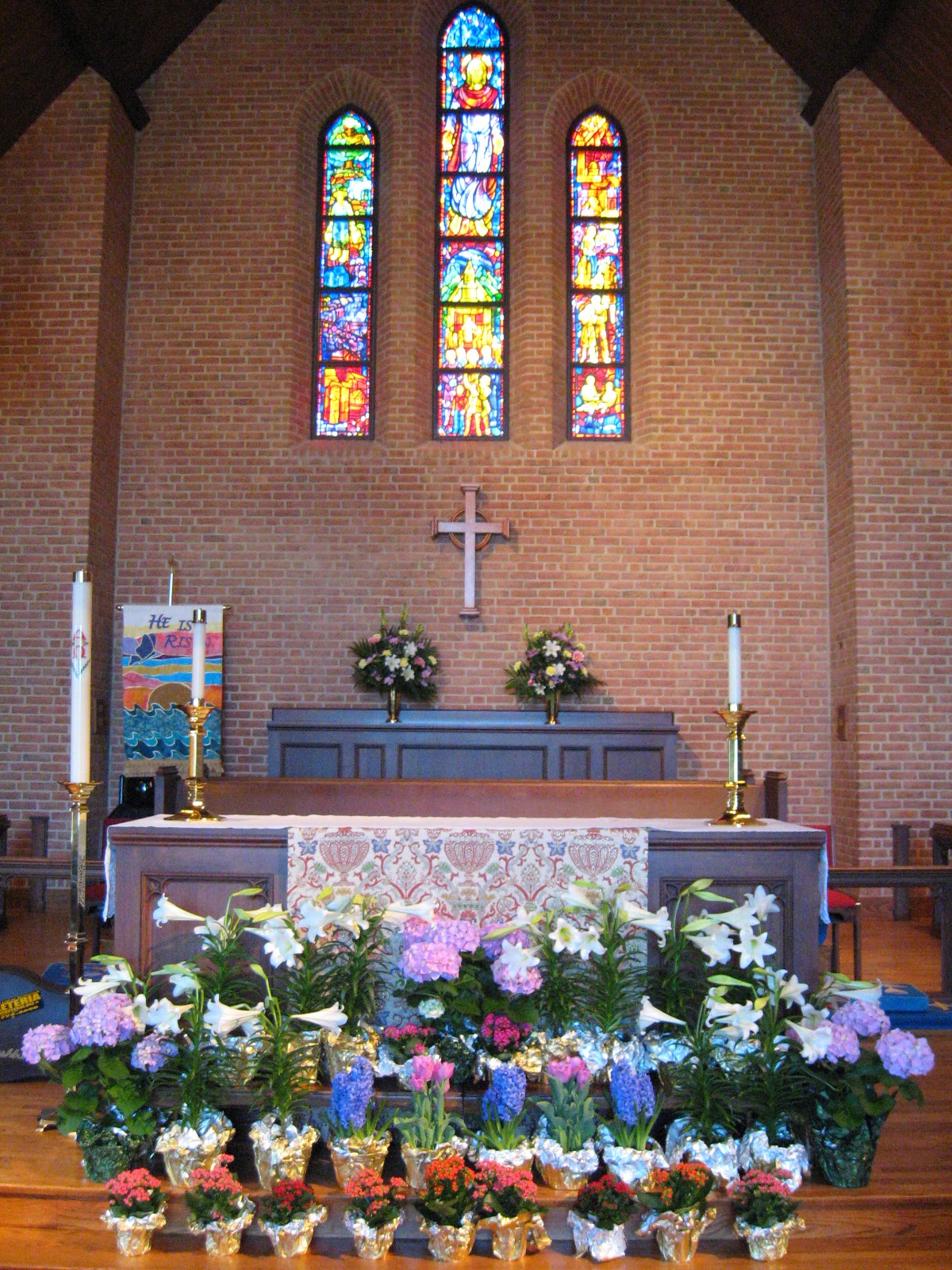 For Easter dinner, at her mum’s request, J made a pot roast with potatoes, carrots, celery and onions (and beef broth and a packet of soup mix) in her crock pot; mashed potatoes with cream cheese, half-and-half, butter, and salt and pepper; and a store-bought loaf of bread that you finish baking at home.
And I made a salad with many kinds of leaves, cucumber, red bell pepper, carrots and celery.
And for dessert, a store-bought yellow cake with lemon frosting and coconut shavings. 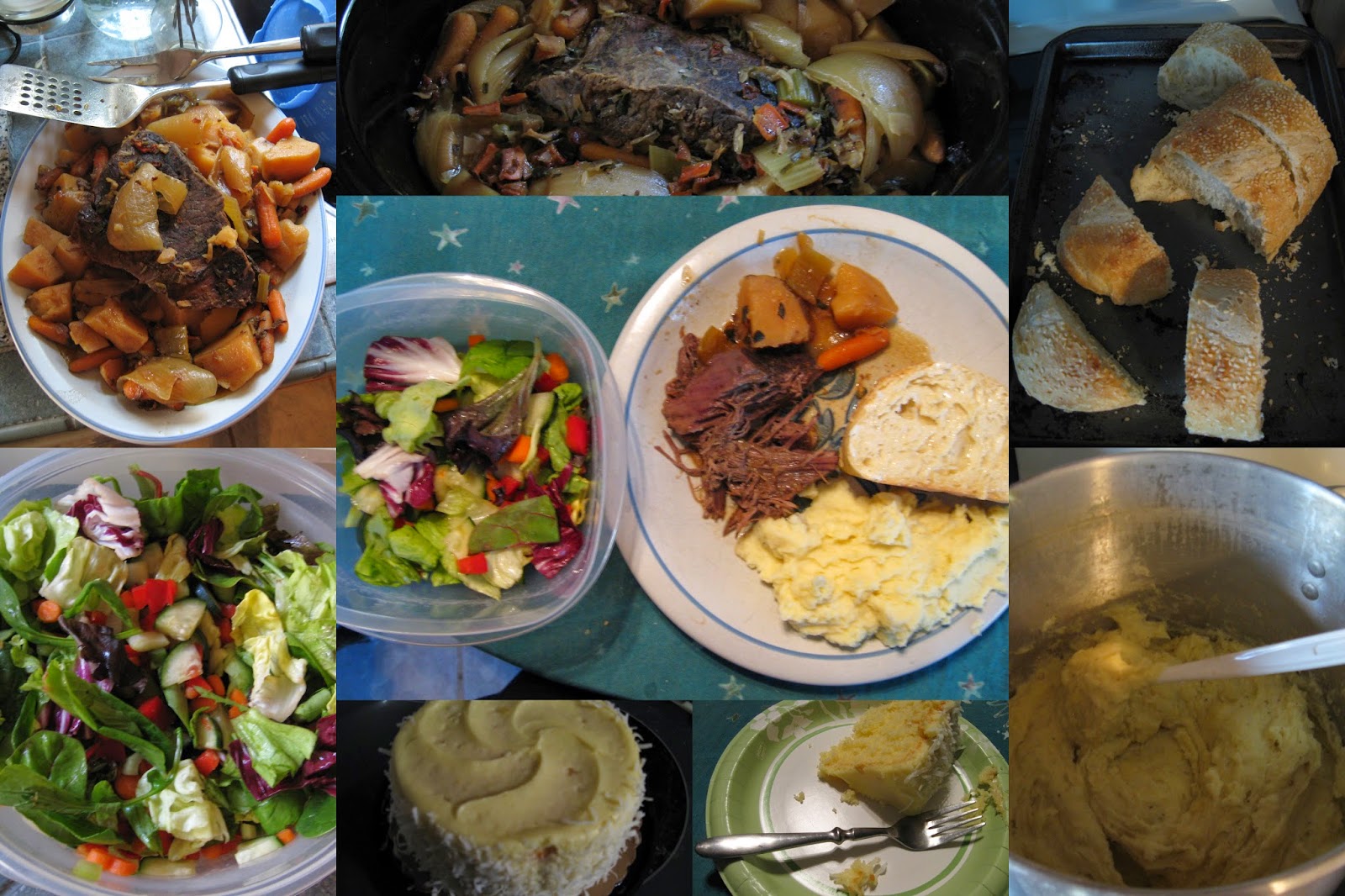 And a special Happy Peaster from our Easter Buggy, whose Zia J sent her a Puppy Cake cake (carob) and frosting (yogurt) kit from which we made six cupcakes.  More in Ursula’s Facebook Group. 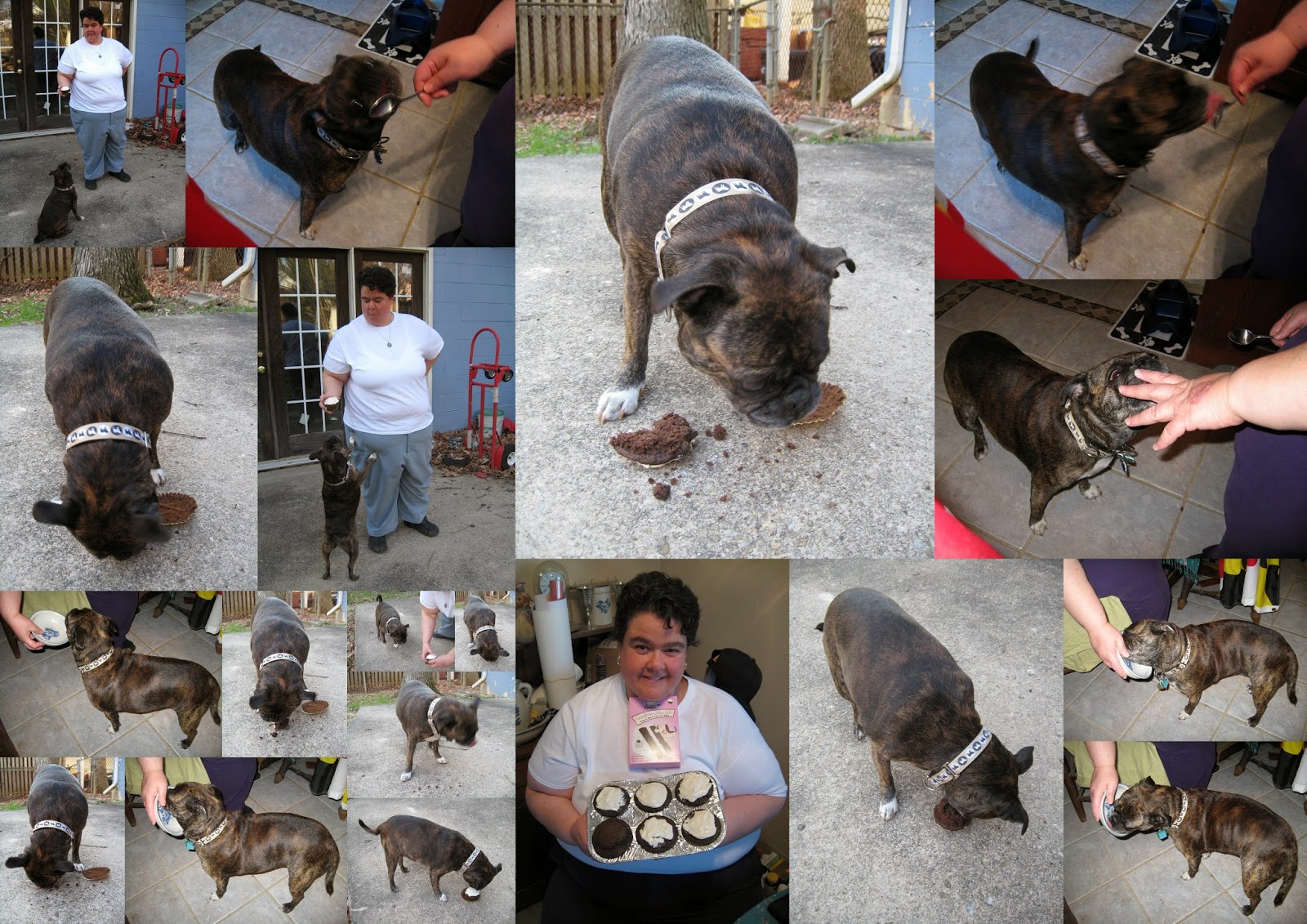