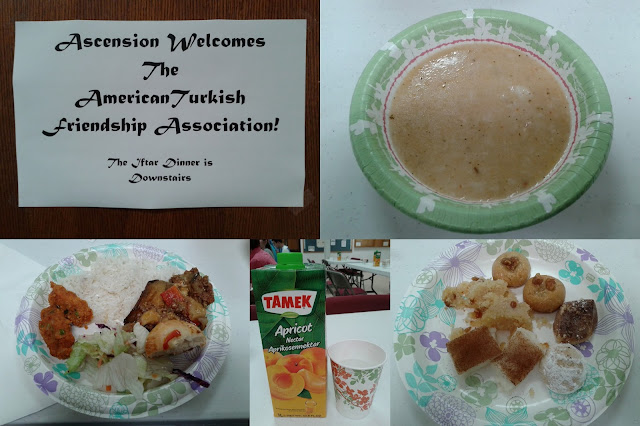 Tonight we went to one of the American Turkish Friendship Association (ATFA)’s Iftar dinners for the second year in a row; last year we were invited by Episcopal Church of the Ascension and went to one at ATFA’s Rockville space, this time Ascension hosted one and we went to that.

A few of our ATFA hosts spoke, as well as our rector Rev. Randy Lord-Wilkinson, Rev. Mansfield “Kasey” Kaseman, and one of U.S. Senator Barbara A. Mikulski’s staffers – the senator couldn’t attend, but sent quite a letter. Randy is also the convener of the Gaithersburg Interfaith Alliance, and Rev. Kaseman is the Interfaith Community Liaison of the Office of Community Partnerships. And we had a pretty large and diverse group of guests, from Ascension and elsewhere.

We watched Terry Spencer Hesser’s documentary Love Is A Verb, about Turkish Muslim leader Fethullah Gülen and the Gulen movement / Hizmet / Cemaat; narrated by Ashley Judd. And then The Islamic Institute’s “The Journey Of Fasting”, an 8-minute film about Ramadan.

I didn’t get a picture of my outfit, oops, but I did a post about it anyway.