skip to main | skip to sidebar
Mycroft Masada is a trans and queer faith leader who moved to Gaithersburg, Maryland (Montgomery County near Washington DC) from their lifelong home of Boston in 2014. A TransFaith National Council member, TransEpiscopal Steering Committee member and former Congregation Am Tikva board member, Mycroft is particularly called to pursue LGBTQI+ and fat justice, and is an advocate, organizer, consultant, educator, trainer, writer and artist. They are married to Julia McCrossin, the massculine fatshion blogger, and with her they co-parent a dogter. Their central online home is MasadArts.blogspot.com.
Facebook | Twitter | LinkedIn | My artwork (stationery, jewelry & more) 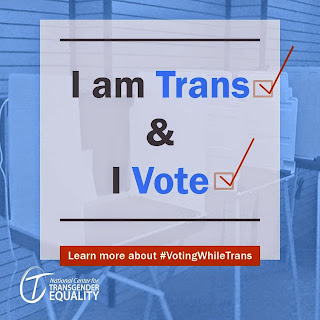 We were Election Judges for the second time today -- as on primary day in June, I was at Asbury Methodist Village (a retirement "campus" so large, at a few thousand residents, that it is its own precinct) and Julia was at Gaithersburg High School (her alma mater -- although like mine, Newton North, the building has been recently replaced).  And this time I also worked two days of the early voting week at the Germantown Rec Center.

(I never heard anything about working for the BOE back in MA -- it seemed like it was just automagically handled by the police and senior citizens.)

And again one of the highlights was that one my bosses was a gay man with a trans nephew who used to be very active in the Episcopal Church.  Also, I saw some people from our primary church (Episcopal Church of the Ascension) and my temp gig at the Census' 2014 Site Test this summer and early fall.

My voting while trans went well, here in my new home state of MD (old one is MA) -- largely due to my geographical and other privileges. Though as an Election Judge, I did have a lot of contestants for Guess My Gender and the other game shows I host. Alas, I don't think that the great majority guessed right, but that's probably because they had the wrong version of the rules, where there are only two possible guesses.