TODAH RABAH to everyone who worked on Yes On 3 for Massachusetts' trans rights law! 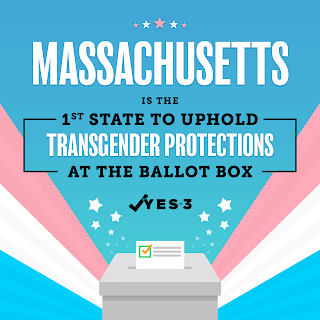 On this seventh anniversary of the first #TransLawMA’s passage, in this Trans Week in Trans Month, I want to more formally say todah rabah, many thanks, to everyone who worked on the second Trans Law MA -- and the #YesOn3 campaign that kept it law! Thank you to Freedom for All Massachusetts, Mass Trans Political Coalition (MTPC), and the many other trans and allied groups and individuals!
On this day in 2011, Massachusetts passed a trans rights law that included gender identity and expression in its anti-discrimination laws around housing, employment, education and credit. In October 2016, they passed another, that added public accommodations. Opponents of the second law gathered enough signatures to put it on this November’s ballot, as Question 3, and tried to convince enough voters to vote No and repeal the law, but thankfully failed.
I’m an Election Judge for our county (Montgomery County, Maryland), so on Election Day I was working from 6 a.m. to after 11 p.m., and most of us aren’t allowed to use our phones or the internet while we’re serving, talk about politics with anyone, or leave the polling place. It was very difficult to wait and pray, hoping that I and everyone else had done all we could, and that the Massachusetts voters would do as they should. I really didn’t know what would happen, and it was so hard to be alone with that for so long. It was so good to get on Facebook late that night, see that it was indeed Yes On 3, and text my spouse Julia who had already seen that.
I was born in the Boston area in 1976 and lived there until 2014 when I moved here to Gaithersburg -- to begin living with my Julia, who has always lived around here. I came out as queer and trans in high school, began by working to pass Massachusetts’ LGBTQ student rights law, and continued my work through the trans rights laws -- primarily by co-leading the faith campaigns for them, as co-chair of the Interfaith Coalition for Transgender Equality. (And I have lots of stories...but many of them start with “back in my day” and end with “get off my lawn”, so we’ll save those for later.) I moved to Maryland in what turned out to be the last few months of their trans right law’s campaign, and I worked on that -- the Fairness For All Marylanders Act passed in October 2014. Its opponents tried to gather enough signatures to put it on the ballot in hopes of repealing it, but failed, largely thanks to Equality Maryland (since merged with FreeState Legal into FreeState Justice) and the Maryland Coalition for Trans Equality.
I’ve been thinking about my history, and the history. Back through the trans organizing I was part of, and before. Back through the history of Massachusetts and Maryland. Back through the thousands of Native people who lived on those lands for ten thousand years before colonists arrived. Back through all the trans people who were among them, as we have been among all peoples, always. Back through all the secular and spiritual histories and mysteries of my people to the first person, the first human, created both/neither/other than male/female, man/woman.
I’m remembering and mourning those who died waiting for this day -- especially as the twentieth annual Transgender Day Of Remembrance is next Tuesday November 20th. In many ways the #TDOR journey began with the Massachusetts trans community’s response to the murder of Rita Hester, a Black trans woman, in Allston/Brighton in November 1998 -- and her murderer has yet to be brought to justice, which is still not at all unusual. So many trans people have been taken by murder and lost to suicide, before and since Rita. At least twenty-two trans people have been murdered in 2018 in this country alone, and the great majority are Black women. May their memories be a blessing, and blessed be the True Judge, as we say in Judaism.
And I’ve been thinking about the future. How will we heal from witnessing many of our fellow Massh...erm, Massachusettsians struggle with voting Yes, or voting No? How will we recover from the loss of resources -- the millions of minutes and dollars? How will we help the two-thirds of Yes voters continue to progress, and reach the third who voted No? How will we continue to work with the faith community, who is mostly exempt from these laws? How will we move beyond the limits of laws to liberation? And how will we be more intersectional? November is also Native Month, including the Day Of Mourning next Thursday November 22nd (Thanksgiving Day) -- how will we be better partners with Two Spirit people?
We still have so much work to do, for trans justice and all justice -- how much more so liberation -- in Maryland, Massachusetts, the rest of the country and the world. May we continue schlepping towards tikkun olam, world repair, at the intersection of LGBTQI+, climate, racial, immigration, spiritual, fat, disability, and all other stripes of the rainbow of justice. Never forgetting that white supremacy has always included cis supremacy and transphobia. Amen!
💚💚💚
#WontBeErased #TransMonth #TransWeek #TDOR2018#TransDayOfRemembrance #TransformTheVote #FridayFeeling#FridayMotivation #Friyay #FridayReads #FlashbackFriday
Posted by Mycroft Masada at 9:00 AM No comments: