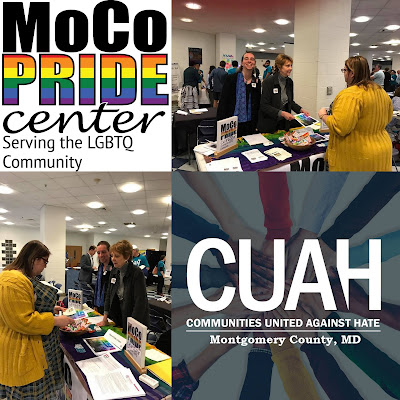 Today was Communities United Against Hate (CUAH) of #MontgomeryCounty’s #CUAHLaunch -- keynote and other speeches*, panel including an LGBTQIA+ student activist**, resources fair including a MoCo Pride Center table (our first!!). My partner Julia and I were there, and I helped staff the #MoCoPrideCenter table -- I’m a Visionary (founding leader) at the Center. #CUAHLaunch

These photos of my fellow Visionary Rev. Jill McCrory and I tabling with a community member were taken by a third Center Visionary. And, #CUAHMCMD interviewed us on video (and I was overly serious, as I tend to be in video interviews!).


The Center’s friends at Maryland Trans* Unity and our local LGBTQ+ youth groups also had tables -- there were some other LGBTQ+ and allied groups as well, though as usual most were DC- or Baltimore-based, which is why we started the Center. There were also many other organizations, politicians and other who sponsored the event.  In addition to their website and Facebook Page, our CUAH is on Twitter and Instagram @CUAHMCMD.