MTPC has added three new video stories to their "I AM : Trans People Speak" public education campaign (http://www.transpeoplespeak.org/). And because this week is Transgender Faith Action Week, all three stories are faith themed -- all three people are Jewish.
Here is MTPC's press release --
Contact Gunner Scott
617-778-0519
gscott@masstpc.org
FOR IMMEDIATE RELEASE
New Videos Highlight Transgender People and Allies Speaking About the Role of Faith in Their Lives
Boston, MA [04.08.11]— The Massachusetts Transgender Political Coalition (MTPC) is excited to announce the release of three new videos as part of their ground-breaking multi-media public education campaign entitled I AM: Trans People Speak.
In conjunction with the Interfaith Coalition for Transgender Equality’s (ICTE) Faith Action Week (beginning Sunday April 3, 2011), all three new videos share the common theme of spirituality and religion.
One newly premiered video features Stephanie, an undergraduate student who identifies as a writer, poet, and spoken word artist. Stephanie, in her search for a new spirituality, found Judaism and is currently in the process of conversion. She speaks about working with her rabbi on her conversion and the strong sense of community she has found in Reform Judaism. Stephanie talks about her temple community being loving, accepting, and welcoming people who help inform and strengthen who she is.
Another video being premiered is that of Stacey, a parent and software engineer. Having been raised in a religious Jewish household, Stacey says she feels that she shouldn’t have to give up who she is just because of her transition. Although Stacey had a good experience coming out and transitioning at her job, she found that not everyone at her synagogue was accepting. Stacey speaks about how difficult, and often scary, it can be when people do not respect your identity.
The last new video to premier on the I AM: Trans People Speak website is of David, an ally to the transgender community. David speaks about how is own identity as a gay male intertwines with his Jewish identity—as well as how the two communities intersect. David speaks about being aware of the privilege he has and how he uses that privilege to be a better ally to the trans community. He shares with us his five tips for being a better ally, and details how he, along with Keshet (a national organization that works for the full inclusion of gay, lesbian, bisexual, and transgender Jews in Jewish life) work to welcome back people who feel like they can’t go back to their religious home.
The stories of these three individuals serve to remind that transgender people, like all people, are more than just their gender identity and expression. Transgender people, like all people, belong to a wide variety of individuals and intersecting communities.
I AM is a collection of recorded stories that aims to challenge stereotypes and misconceptions of transgender individuals by highlighting the realities of their lived experience. These voices span across a diversity of communities and intersecting identities. I AM fosters support and raises awareness for trans communities by providing a forum where these unique stories can be shared and given significance.
All three new videos were filmed and edited by Jesse Begenyi, a Boston filmmaker. Begenyi and MTPC plan to continue filming and uploading new videos to the website periodically.
For more information please visit www.transpeoplespeak.org or direct questions to info@transpeoplespeak.org.
For more information about ICTE’s Faith Action Week, please visit www.interfaithcoalition.blogspot.com.
###
About MTPC: Founded in 2001, the Massachusetts Transgender Political Coalition (MTPC) is dedicated to ending discrimination on the basis of gender identity and gender expression. MTPC works for a world where persons of all genders are treated with respect and fully participate in all areas of society, free from fear of prohibition, harassment or violence based on their gender identity and/or expression. Its members educate the public, advocate with state, local, and federal government, engage in political activism, and encourage empowerment of community members through collective action.
Posted by Mycroft Masada at 7:00 PM No comments:

A Night To Remember Stephanie Edwards is TOMORROW 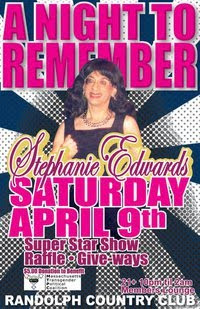 Stephanie Lynne Edwards passed away on Saturday December 18th.
She was a member of Tiffany Club of New England, the Massachusetts Imperial Court, Congregation Am Tikva, and Keshet. She served on TCNE’s board of directors, MTPC’s Steering Committee, and the Randolph Town Meeting (there’s a Patriot Ledger
article about that from 2007); she was also part of the Randolph Country Club
community. If you know her other name, you can find her obituary. She was also
memorialized at Tiffany Club’s annual First Event conference in January.
I knew her through the Jewish and transgender communities, primarily at CAT, Keshet
and MTPC. May her memory be a blessing (as we say in Judaism).
Daphne Prideaux and Genesis of Randolph Country Club have organized a tribute event for Stephanie tomorrow, which is also a benefit for MTPC. I will be attending with two fellow MTPC Steering Committee members, and we’ll be giving a brief speech.
All are welcome – but all guests must be 21+.
A Night to Remember Stephanie Edwards
TOMORROW, Saturday, April 9th, 2011
10:00 p.m. – 1:00 a.m. (Sunday)
Recommended arrival – 9:00 p.m.
Randolph Country Club
44 Mazzeo Drive
Randolph, MA 02368
All guests must be 21+.
$5 donation at door and raffle tickets for donated prizes all benefit the Massachusetts Transgender Political Coalition (MTPC)! There will also be giveaways, and performers from RCC and the Imperial Courts of Massachusetts and Rhode Island.
Tiffany Club website page:
http://tcne.org/?p=4114
Facebook event:
http://www.facebook.com/event.php?eid=134589683278754
Posted by Mycroft Masada at 10:23 AM No comments: