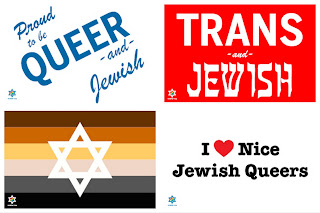 If you're looking to see and/or submit Jewish LGBTQ Pride Month stuff, visit Keshet's page at http://www.keshetonline.org/pride/. Here's a collage I made of my favorite images (yes, that's a Jewish Bear flag, squee!).

Boston Pride is the top story in the Episcopal Diocese of Massachusetts "E-News for May 2015" of May 20th, and the story's on their site here (EDOM was my diocese from birth until January 2014 when I moved to MD).  But we of TEC need to work on making "I think we're ready for a big fat celebration" a much...bigger double entendre.  #fatjustice

There’s also a Pride month piece in the June issue of Episcopal Church of the Ascension’s newsletter The Ascendant -- which I might have had something to do with (Ascension is our home church).

Among its many other meanings, June is LGBT Pride Month; locally, nationally and internationally. Though lesbian / gay / bisexual / transgender / queer et al (LGBTQ) history is as long as human history, in June of 1969, LGBTQ people at New York City’s Stonewall Inn fought back against a police raid. Every June since, there have been more Pride observances in more secular and faith communities -- marches, festivals, worship services and much more -- including here in the DMV.

And the LGBTQ community calendar has grown to include other special days, such as the international Transgender Day of Remembrance each November, where we remember all those who have lost their lives to transphobia – especially trans women of color. And for the first time, Montgomery County is presenting a trans-focused event this month too – more about that soon!

The Episcopal Church has long been a leader in the journey towards LGBT social justice, especially since the 1970s, within the larger Church and faith community as well as in the secular world. And we of TEC are blessed with our own LGBT and allied organizations, including Integrity USA and its transgender-focused partner TransEpiscopal, The Consultation and the Chicago Consultation. And all of these will be continuing their good work at the Church's 78th General Convention, this month and next in Salt Lake City.

Part of Integrity’s ministry is inviting Episcopal communities to become Believe Out Loud congregations, who publicly welcome and affirm LGBT people and have completed a six-step process -- Ascension is proud to be a BOL church; see http://www.ascensionmd.org/about-us/believe-out-loud/. One way we believe out loud is our conversation series Experiencing Diversity At Ascension, which includes LGBTQ issues along with race, class, gender, ability, health, age and more. Stay tuned to this and our other communications for the next part of this process.

For more information about LGBT issues in the Church, we invite you to visit http://www.episcopalchurch.org/page/lgbt-church. Happy Pride!!”
Posted by Mycroft Masada at 7:00 AM No comments: