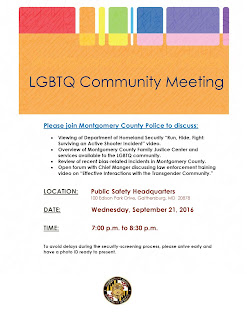 Tonight Julia and I attended the Montgomery County Police Department's second LGBTQ Community Meeting.  The first was in June, planned before and then galvanized by the mass shooting at Latin Night at Orlando's Pulse LGBTQ nightclub earlier that month.

There was only one member of the media present this time, apparently -- a reporter from WHAG, who did publish a story (video and transcript), and quoted my colleague Rev. Jill McCrory and I -- and not as many people; but hopefully that will change, especially as we continue to create the MoCo Pride Center (we have finally started an LGBTQ center for our county, and Rev. Jill is in leadership there as well).  And Julia's mother came with us for the first time (you can see both of them in WHAG's video).

The next meeting is scheduled for Wednesday December 7th, and the contact person is Lieutenant Nick Augustine at Nicholas.Augustine@MontgomeryCountyMD.gov -- a gay officer who speaks at and MCs these meetings.