Itzik's Well / Irwin Keller's "What Jews Look Like (Or: did they ever diet in the shtetl?)"

AWESOME -- and accessible -- midrash re: Parashat Korach, fatness, and more!  Itzik's Well / Irwin Keller's "What Jews Look Like (Or: did they ever diet in the shtetl?)".  Thanks to Penina Weinberg (local fellow faith leader) for sharing it with me!

What Jews Look Like (Or: did they ever diet in the shtetl?)

This week we read Parashat Korach, the portion of the book of Numbers in which a Levite named Korach, along with his family and friends, speaks out against Moshe's authority, arguing that the people's truth needs to have a role as well. Moshe sets up a test, or maybe an ambush, and Korach receives a divine slapdown of almost unimaginable proportions. Not only are his ideas quashed, but he and his people are swallowed up by the earth. The firepans they had used in the test are purified in fire and become part of the altar -- as a warning, according to the harsh text.

It's an interesting portion because as modern Jews, as voices for social justice, as questioners of authority and would-be truthtellers, our sympathies tend to lie with Korach. For me, this week has become an annual celebration of the rebel in us, and of our willingness to suffer the slapdown, the backlash, the firestorm that sometimes follows in the wake of representing unpopular truths.

And so I was particularly interested and excited this week to read the essay "Sized Up" by my friend Anna Mollow. In it, Anna takes to task our conventional wisdom about fatness and the health risks popularly associated with it. She asks us to look at the science, which does not support our suppositions and, once we're done with that, to see the ways in which it has become popular and unremarkable to scapegoat fat people in our society. Why, she wonders, is it important to harangue fat people for being fat, when studies actually suggest that fat people live longer than skinny people.

Speaking out, Korach-like, against conventional wisdom -- against ideas that we are certain are truth but can't quite put our fingers on how we know that -- she brought on a firestorm. If you're wondering where firestorms occur in this day and age, just look at the "comments" section of any online article. Some commenters expressed gratitude and relief for their truth being spoken. And others condemned, sometimes in cruel and personal terms, the very suggestion that our ideas about fat might be wrong. After all, what believer in healthy living wants to be told that they might actually be guilty of an ugly sort of prejudice that can no longer quite so easily be packaged as scientific or even painted as well-meaning?

I was among those who thought, "This can't be true. Fat people live longer?" So I went to some of Anna's sources, including The Diet Myth by Paul Campos and New York Times reporter Gina Kolata's Rethinking Thin: The New Science of Weight Loss---and the Myths and Realities of Dieting. These books are exposés, gathering up the science that supposedly justifies our views of fat. But what the studies actually say is not at all what we've been told, and it's eye opening. Here are some of the surprising findings that you might need to read a couple times to absorb:
In her essay, Anna sketches this problem as a queer issue, noting how the almost unthinking scapegoating of fat people looks like, and serves a similar social function as, the oppression of queers in this country (at least until relatively recently). Where queers were medicalized and psychologized baselessly; where queer jokes and disparaging comments used to be safe in any social setting, it is now fat people who are medicalized, and it is the fat joke that no one will object to.

And I, because it's what I do, would like to make this a Jewish issue as well, as many others, such as my friend Jane Herman, have often done. Because we Jews, as a tribe, come from shtetl stock; our bodies do, in fact, deviate from the American ideal. Thin is not our dominant shape. And our shape should be our core reference point, not the shape of someone on a Weight Watchers commercial. 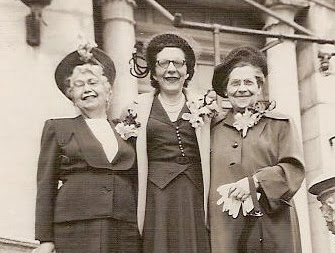 These are my great-grandmothers -- the two on the sides, seen here flanking my grandmother,  all celebrating Mother's Day in the early 1950s on Chicago's Michigan Avenue. Rebecca is on the left and Rose on the right. Grandma Sade is in the middle, but it is Rebecca and Rose I want to talk about. Both diminutive in height, both formidable women, both immigrants, both zaftik.1

Neither of my great grandmothers was ever told to diet; neither of them ever did. Neither of them was told that fat was bad or that to be Americans they had to be skinny and blonde. Neither was informed of the supposed health risks of obesity, although both would certainly qualify as "obese" under the current BMI standards (as do, by the way, George Clooney and Tom Cruise). As busy balabostehs, heroic homemakers with many newly American children, neither had time to notice that fat people were supposed to be lazy and sedentary. Probably neither ever ate a McDonalds hamburger, although they ate well and Jewish. Both lived well into their 90s.

This is, takeh, how Jewish women look. At least in my book.

The point is that our ideas about fat are social, not medical. There is a social hatred of fat people in this country today, and in the last generation or so we have justified it with false science. The real science is out there, but the media and the public haven't caught on, and the diet industry doesn't want us to.

What is normal weight? What makes a weight ideal? Looking at the data, heavier than our current norm is in fact better for you. It's as if someone took the actual ideal window, compressed it and gave it a hard shove leftward on the bell curve.

Remember your grandmothers and your aunties; your Ashkenazic, immigrant, pre-diet craze foremothers. That is what women look like.

Once the science is yanked out from under the supposition that fat is bad, what is left to justify our constant criticism of fat people? An aesthetic judgment? Fat people are not attractive? A moral judgment? Fat people are lazy or lacking in self-control? No one would have called my great grandmothers any of those things. No one would have called them unattractive -- at least not until they arrived in America, where Jews and other undesirable ethnics increasingly could not be kept out of the professions and the social clubs, but at least they could be kept out of the aesthetic of physical desirability. A skinny Anglo-Saxon aesthetic, combined with a Puritan work ethic and, eventually, a multi-billion dollar diet industry, turned people who look like our grandmothers into people to be judged on the basis of their bodies.

Jews - take note. Our bodies haven't changed; just our values. Did anyone ever go on a diet in the shtetl? What would the idea of purposeful weight loss have sounded like to them?

Reject the war on obesity. Reject the vilification of fat people. Speak up against fat jokes. Oppose the shaming of fat kids, whether it is by school yard bullies or by public health campaigns. Fight for good health, healthy food, healthy activity and health care for everyone of all sizes. Stop trying to make fat people thin - and that includes yourself.

Before we finish, though, there is something in the Korach story that has always puzzled me. The firepans that belonged to Korach the rebel and his people are incorporated into the altar in the mishkan, the holy tent. You'd expect them instead to be cast out of the encampment. And though the text says it's a warning, some element of Korach's rebellion is clearly understood to be holy. And over time, Korach's plea for equality and fairness has become as holy and Jewish a value as anything Moses handed down at Mt. Sinai.

Plus, as my friend Atzilah Solot pointed out to me this week, another element of Korach is this: that even when our ideas are swallowed up by the earth, they become like seeds that will most certainly bloom later.

So let us open ourselves up to new truths; let us question any orthodoxy of thought; let us stand up for equality and fairness even -- and especially -- when the culture tells us that harsh judgments leveled against a class of people are natural and justified. And even if our voices are drowned out right now, know that we will have planted the seeds whose blossoming is just a season away.

Many thanks to Anna Mollow, Jane Herman and Atzilah Solot for all the inspiration and the insights.

1 Anna warns in her essay against euphemizing "fat", but I perceive "zaftik" in Yiddish as both non-evasive and as having a warm, favorable valence, meaning literally "juicy." I've always perceived it to be a word that doesn't mince words, and which is said proudly, descriptively and lovingly. I could be wrong - I've never been called zaftik, I don't know how it feels. And being affectionate doesn't necessarily make a euphemism not a euphemism. Maybe it's true that I don't want to say fat, and that I'm still working up to it. But in any event, in the name of reclaiming our particularly Jewish acceptance of diverse body shapes, I'm willing to go out on this limb. ↩
Posted by Irwin Keller at 9:27 PM

Posted by Mycroft Masada at 2:27 PM No comments: